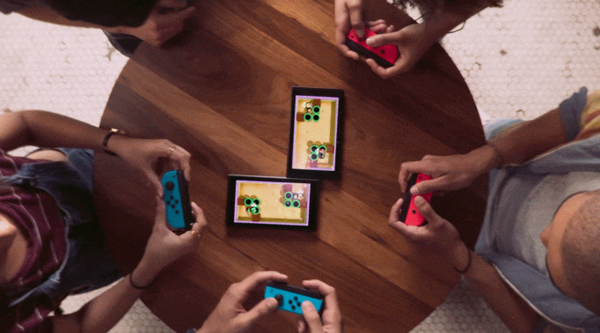 Remember when Nintendo showed off the two-Switch mode for Super Mario Party? The one that included twisting the screens to match-up banana pieces? That mode is called Toad's Rec Room, and some new details for it have surfaced.

- allows two Switch screens to be joined together for table-top gaming
- both Switch units will need a copy of Super Mario Party in order to play
- "Banana, Split" involves rotating two Switches to match up pictures of bananas
- draw a line between the screen to match up banana pieces
- the game includes a countdown timer to see which player makes matches the fastest
- Shell Shocked Deluxe is a two-versus-two mini-game that puts players in tanks to fire missiles at each other
- the battleground can be arranged in almost any way imaginable
- the area of black screen on the borders where the two Switches meet is counted as a space in the game

Both needing the game is BS...

Bring back download play. Even if it's a separate app for each game that needs to be downloaded like Star Rush.

How do the two Switch's know their position relative to each other?

When you put them down, you swipe across in a straight from one screen to the other. The game tracks where you leave one screen and enter the other. These points must be close to each other, but the line continues over the bezel, so they're not just simply adjacent. The angle of your line, the constant width of the bezels and the right angle formed between the bezel width and screen edge is enough information to use trigonometry to determine how offset the points you leave one screen and enter the other are.