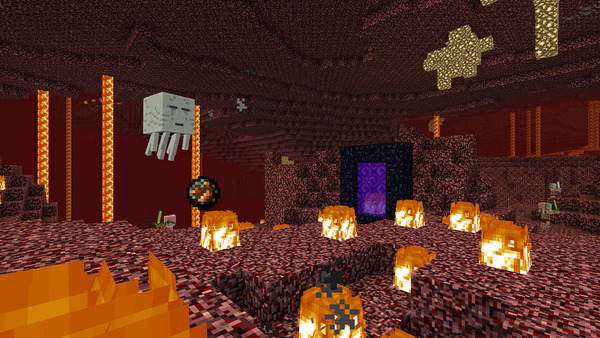 Minecraft has gotten a bump up to Version 1.70, and it brings a ton of new content and changes with it. Check out the full patch notes below!

Mentions of player names are now highlighted yellow in chat
Typing "@" in chat will show an autocomplete list of player names
Command Block functionality can now be toggled using the 'commandblocksenabled' game rule
Made it easier to find purchased content, search, and go home from the top of the Marketplace screen
Improved search results, sorting, and filtering in the Marketplace

Fixed an exploit that allowed custom skins with custom and invisible geometry, causing unfair advantages in multiplayer sessions (MCPE-37343)
Added additional messaging to disable Multiplayer in world settings to play split-screen without a Nintendo Switch Online membership
Guests rejoining in a different order than they joined for the first time no longer generate different progress during split-screen gameplay
Synced cloud worlds on Xbox One now display the proper date on the Worlds list
Fixed player permission issues that prevented players from building or mining
Fixed Super Mario Mash-up Pack worlds not opening if created before version 1.6.0 (MCPE-37327)
Fixed textures not applying on Nintendo Switch when the world is hosted on another platform
Fixed split-screen players not being able to join Local Network games on Nintendo Switch
Fixed Microsoft Account sign-in failures on Nintendo Switch

Crouching on ladders will no longer stop when opening the pause menu or inventory screen (MCPE-33209)
Swimming while moving the camera with touch controls no longer breaks blocks (MCPE-33470)
Items can once again be dropped while in a boat
The Looting III enchantment once again increases mob loot drop chances (MCPE-35307)
When a player equips a carved pumpkin as a helmet, that player's marker now disappears from the Locator Maps of other players
Players no longer teleport to vehicles/mobs that are hit by an Ender Pearl when the vehicle/mob is in the player's render distance
Fixed players getting stuck in the edges of Old Worlds at 128 or in the Void
When dealing a killing blow to mobs using Knockback, they now actually get knocked back! (MCPE-19222)

If a pet forgets what player is their owner after updating the game, it will sit down and wait for someone to interact with them & this player becomes the new owner of the pet. The pet doesn't need to be re-tamed with items (MCPE-33152)
Mobs can now walk through Soul Sand with Nether Wart (MCPE-12719)
Skeleton Horses and Zombie Horses no longer die after a certain amount of time (MCPE-35215)
Horses in the same boat as you no longer get hit when targeted by blocks in front of you (MCPE-30299)
Releasing a Tropical Fish from a Bucket of Fish no longer releases a random fish but the one that was originally caught
Armored Withers can no longer be damaged with thrown Tridents
Drowned no longer have swimming animation while riding in boat
The inventory of ridden mounts can no longer be accessed by another player while you are riding it
Mobs can no longer spawn in small gaps unless they can fit (MCPE-31193)
Enderman can no longer spawn in two block high gaps with Slabs above (MCPE-28626)
Cured Zombie Villagers spawned from Zombie Villages can now be traded with (MCPE-34603)
Pigs with Saddles now throw players off their back when they start moving though 2-block-high bodies of water

Updated templates for 1.7.0 with new assets and behaviors can be downloaded from minecraft.net/addons
Using behavior files to change the shooting location of a projectile no longer makes the projectile shoot and miss the target
Mobs now stop moving when all movement components are removed from their behavior
The 'can_float' component now works properly with 'minecraft:navigation.float' on flying mobs