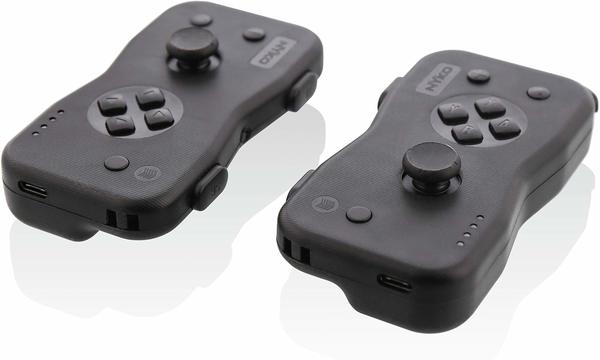 Race, jump, shoot, run and more while feeling every bump and shoot with Dualies for Nintendo Switch. Dualies are a motion controller set, the first 3rd party Joy-Con alternative and are perfect for adding additional players to a multiplayer experience. They feature accurate, multi-functional motion control and rumble feedback to provide immersive gameplay and are compatible with most Switch titles. The larger, more rounded edges allow for an improved grip, especially while playing sideways, giving more comfort and improved ergonomics. Included is a Type-C cable with a 56K oHm resistor to recharge Dualies quickly and safely anywhere. The cable can also be used to safely recharge the Switch. Also included is detachable thumb caps that will customize the input precision by fine tuning the sticks length and size.

They look ok if using a single one sideways like a NES controller but they don’t look comfortable otherwise.

Agreed, and I guess can't be used for handheld.

They look uncomfortable AND ugly!

Like one of those weird cases you get for a Wii U gamepad or a phone but only if you have kids.

That's not bad for those who want cheaper controllers for kids or just in general as you can add 2 more players. It beats paying the $70-80 dollars for another set of Joy-Con. I for one will not be buying Nyko products after they screwed me with their Dock as it bricked my Switch. I had the Dock shipped in and they promised me a refund and to reimburse me to get my Nintendo Switch fixed but then they went silent. Never heard back from them after that, so i am not giving them my business at all.

This looks like the ultimate “here’s your controller bro” controller

Doesn't support HD rumble, just "simple" s\rumble... That alone is a no no.

Most third party Switch controllers don't have rumble. It's a start.

Darn it. HD rumble, if done well, is great! FAST RMX and Octopath come to mind. And that Senran Kagura "game" did a pretty OK job. Wish more game devs would get more into it. I can just imagine an action-packed game like BAyonetta 3, being exclusive to Switch, use HD rumble to the max. That little extra immersion, even if you don't think about it, can give the game(s) extra spice.

I mean, in FAST RMX it feels great. What part of the...uhm... vehicle gets hit where and how hard. And the landings from jumps. Amazing.

Bottom line: No 3rd party controllers for me it seems.

MY EYES! Clicked on the link at the bottom of the page and was brought to that disgusting site. These are in some ways more practical than the Joy-Cons, they're more egonomic and have better L and R shoulder buttons. But they can't attach to the Switch, don't have HD Rumble and don't have an NFC reader. I don't think they're worth $50. They could have designed these far better, e.g. made the trigger buttons bigger. The official Joy-Cons are awful but these aren't a viable alternative.

I seem to be the only person who thinks they look kind of funky.

An understandable product, but not what I want to see from third-party Joy Con. The bigger market is the "second set for multiplayer" and this seems to focus on that role; cheaper, just about full functionality, focuses on being used sideways. The grip seems compromised for its sideways use and isn't as optimal for vertical use where it would be best to have an angled grip. I'll tell ya though, imagining rails on the bump of the grip and designing more of the controller to hang over the face of the Switch would be a pretty neat concept. There's lots of bezel around the screen to accomadate it and you could space out your buttons and sticks for comfort first and foremost.

The analog sticks on Nintendo's Joy Con are bad. They're loose at the center, have short travel, have an uneven amount of give when moving into diagonals (a couple of "good" Nintendo controls do this as well), and worst of all they fail from dust and debris too easily. Maybe these improve on one or two things, but it's not the whole package I want to see.

Nintendo's Joy Con use a set of buttons instead of a d-pad, have vertical arrangements of sticks and buttons instead of the more comfortable diagonal arrangements, have lacking shoulder buttons, and don't maintain a stable connection at reasonable distances. There's so much room for improvement (that the Pro Controller fills, but the point is the Joy Con are lackluster) that I wish a third-party would target, but this isn't what Nyko aimed for.

I think some games work perfect with the joy-cons as are. Zelda BOTW is a joy (no, no puns here) to play with the split joy-cons. Can sit down and hold my arms as I wish which is a drea come true from the almost-there time of the Wiimote and Nunchuck. I can use my right hand with motion for aiming arrows, for example, when I walk around using my left. It's just a very comfy way to play the game (I ahve shitloads of more examples). The same with Spla2n. I tried playing it with the pro controller and damn how that sucked! Seriously, it was just BAD! But with joy-cons! Perfect.

Now games like Bayonetta1-2 or DragonballZ Xenon2 I really prefer the pro controller (In X2 I kinda like the joy-cons for my kame hame though... The reason I chose the Switch version, but I might have to drop it for the rest of the game).

Also, both me and the bassist in my band played a lot of Sonic Mania with one joy-con each, and with my long tentacle fingers and his gorilla hands we had a blast with it. Just took a little time to get used to. But could never imagine playing Street Fighter like that.

Good to have options, and the Switch is filled with that (f you have a pro controller, you're all set)