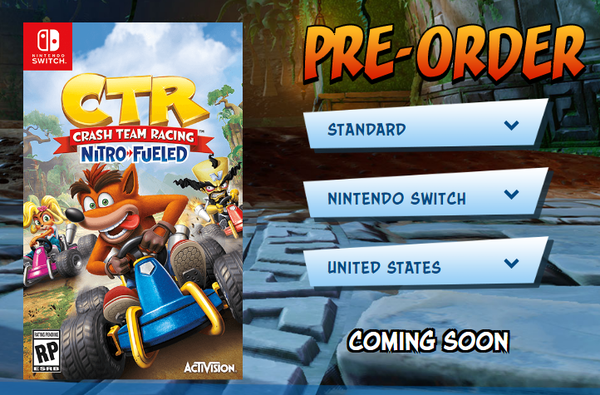 As we posted a few days back, multiple retailers removed their preorder options for Crash Team Racing: Nitro-Fueled on Switch, and even went as far as to cancel some preorders. While we have an update on the situation, it's not one that makes things any better.

The image above is from the official website for Crash Team Racing: Nitro-Fueled. The only version that shows a 'Coming Soon' release date is the Switch. If you change to PS4 or Xbox One, you get the June 21st, 2019 release. This only furthers speculation that the Switch version is going to end up releasing later than PS4/XB1.

Thanks to CyberWolfJV for the heads up!
Source: Link, Link
Rating: -4

It would hardly be the first time this has happened. Switch versions of games have been announced at the same time as other platforms and released 8 months afterwards, e.g. Wolfenstein II. Or how about Dragon Quest XI, we haven't even seen a screenshot or that on Switch, it has no release date, nothing and it's been out for over a year elsewhere.

At the same time there are some games on Switch that get parity releases, e.g. FIFA, but then it's gimped, looks and runs worse too. And Crash Trilogy that released on the same date everywhere so this is a little strange. The game is some way away from release so things can change.

Activsion refuses to not suck this generation.

They are scared of taking risks anymore.