RUMOR - Next Nintendo Labo release to include VR support 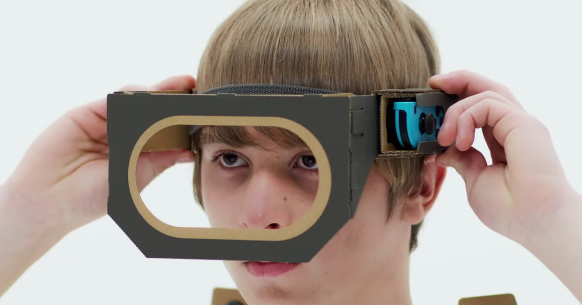 Let's follow-up on today's Switch VR rumors with a juicy tidbit we've heard! This comes from a very, VERY trusted source that we have a long history with. The source wishes to remain anonymous, so we won't be revealing their name.

This source tells us that the rumor of Switch getting some sort of VR support is true. More specifically, it seems that Nintendo Labo will be the first target of this VR support. We don't have details on what the kit will include or what it's called, but one would imagine it to be a collection of experiences.

Will this be a one-and-done VR experience for Switch, or the first of many? That all remains to be seen, but we can say one thing for sure. We trust our source on this matter 100%.

I don't know if I'd trust the cardboard to stop my Switch from falling on the ground.

The best way to drop Labo would be to turn it from a weird toy experiment to their VR platform XD.
Thats the only way I can see them selling them, it would be kind of genius.

Nintendo Cardboard VR. Makes sense to try their VR on another experimental product.

I hesitate to make judgements with little details but I can’t imagine anything but the most ghetto VR possible. The Switch screen isn’t a good resolution to have in front of your eyes to begin with.

This. Cardboard VR is bad on low res phones.

I guess as a small Labo project this makes sense. The Switch does not have anywhere near the capabilities required to do anything close to proper VR, the resolution of the screen alone makes it a no go. So maybe as part of a labo game, people will take it less seriously and consider it a small fun minigame.

Like others, I'm skeptical of the quality of VR experience you could have with the Switch. However, I'm not against them trying it out. Making it part of a cardboard Labo kit means we can potentially try it at a reasonably low cost. And who knows, make even a sub-par VR experience can be fun if it didn't cost us a lot.

Ahh so Jon from Gamexplain is your source.

Just kidding. He was joking when he made that joke in his prediction video.

Only with Nintendo can a joke turn in to a real product.

One day Radio Free Nintendo will be right and Glitter Metroid will join the ranks of the yarn and paper craft games.

I don't think it would be a great idea, especially as the Switch screen has low resolution. And what, are they going to dangle it in front of your face in a piece of cardboard? I think Labo is a failed experiment and maybe Nintendo will try anything at this stage to try and rescue it. Nintendo had huge expectations in terms of sales and they haven't happened. It's the one product from them on Switch that’s been at times on sales at significantly reduced prices. You don't see their traditional games on sale.

I’ve been wondering, that could they possibly use a mobile phone as a sort of a second screen for the Switch? It could be used with the likes of Mario Maker 2 and to display VR content.
Modern smart phones generally have a higher resolution and are smaller (and maybe a little lighter) than the Switch main unit.
I guess the main technical issue would be getting it to stream data between the console and the phone with zero lag, and the other issue is licensing and making phone apps.

As long as Nintendo won't require VR on any game (other than a LABO pack) I'm okay with it. I won't get the LABO VR anyway.

Yeah...No! My PS4 Prois almost just for VR games these days and even that isn't so great. It's damn good, but not great. So this sounds a bit off. MAybe a Minecraft-like game in "VR" could work. It's boxy but it's good. The New Switch 2 on the other hand....

But I actually do hope this is true since I truly love VR and want Nintendo to venture nto those waters.

P.S: We all kow that your source is the ghost of Iwata-san.

Well this is certainly a quirky but intriguing way to go about doing VR on Switch--if true. If this happens I will be very interested to see how it turns out.

And, you know, given that my iPhone 4 was only 960x640 resolution and could do simple but totally functional VR using cheap VR attachments, and the Switch has a resolution of 1280 x 720, and also that Google Cardboard shows how a simple cardboard headset could be constructed and work (just add a strap so you can wear it on your head)--this could actually work.

It will be simple, but if Nintendo puts compelling enough games/experiences in there, it could actually be rather cool, and maybe even very cool. It could possibly even be a little bit of a system seller if it's done right and Nintendo puts some truly compelling experiences VR in there, especially if they're built around Nintendo's most popular mascots and the like.

Man, I really am interested to see if this happens and what it turns out to be.

PS. Surely it has to be called Nintendo Labo: "Cardboard" Kit or something like that. lol

Even then, its optional so I'm least bothered.