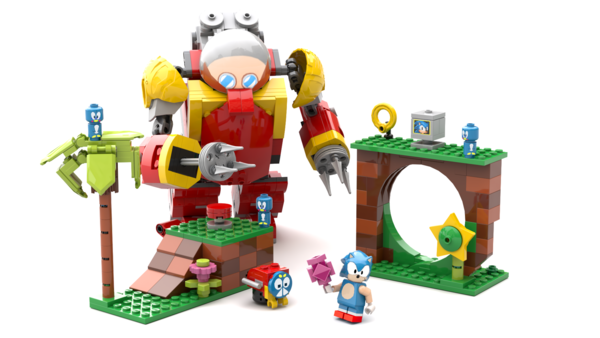 Connect the Green Hill Zone modules together to design your own setpieces, mimicing the power of the Phantom Ruby warping the world!
Use the “Spring & Palm Tree” module to launch Sonic and his Flicky friends into the air, using the Technic lever to move the spring!
Use the Sonic the Hedgehog minifigure to run through the environment, collecting the ring and Extra Life (representing this being Sonic’s second try after his virtual journey through LEGO Dimensions!)
Dr Eggman can sit inside the Egg Robot mech, which can pose with its articulated arms and legs.
Use the handle on the end of the Egg Robot’s arms to extend its hands and use the drill attack on its enemies!
The Motobug can catch Sonic by surprise, making him lose his ring!
Have Sonic and Eggman fight for the Phantom Ruby!

Do you like the above Sonic Mania LEGO set? It's another fan-made creation on the LEGO Ideas website. It will be considered for actual release if the project can get 10k votes. If you want to help the cause, you can toss a vote towards the project right here.