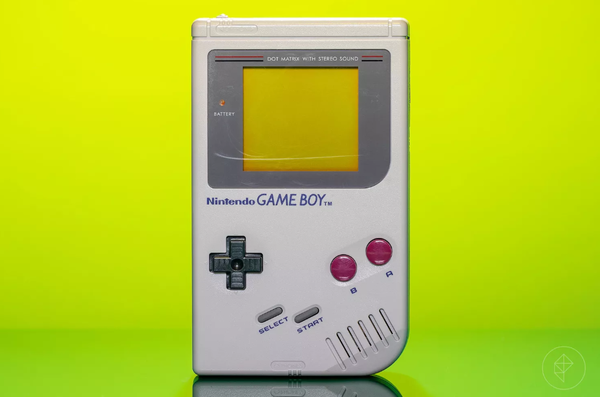 The Game Boy was one of Nintendo's major phenomenons, and sent the company into a completely different stratosphere when it came to success. While Nintendo had found a ton of fortune with the NES, the Game Boy's success outside of Japan wasn't guaranteed. The burden of marketing the device in the states fell on marketing manager Don Coyner, and he wasn't sold on the name from the get-go.

“I was sitting in my office and [Nintendo of America president Minoru] Arakawa walked in with a Game Boy in his hand and gave it to me and said, ‘We’re launching this at Christmas. I looked at it and my first reaction was, ‘That’s a really bad name.’ You know: ‘Game Boy.’ He’s like, ‘What do you mean? Why is it a bad name?’ I said, ‘Well, it feels really young. It seems a little bit sexist and it just sounds kind of Japanese.’ He was a very quiet guy, thoughtful guy. He kind of said, ‘Hmm, yeah, we’re not going to change the name.’”

The decision to stick with the name seemed to be a good one, as the term really caught on. There are still people today who call any portable gaming system a Game Boy!

This is just one small snippet from a fantastic Polygon feature on the Game Boy's history. Do yourself a favor and check out the full piece here.

It is most certainly a bad name but it sold over a hundred million units so at this point it doesn't really matter. Still is a bad name though, I was actually thinking about that yesterday, now I know that at least one person did bring that up before release. But people also brought up the Wii U's name before launch, so clearly Nintendo doesn't like to change names of products.

I don't think it's a bad name. At least not for the time. Gaming was usually associated with young boys back then, so I actually find it rather fitting in that sense...But ut is an odd name too.

The Wii U was just pure crap! I couldn't believe my eyes and ears when they showed it off....And it DID bite them hard.

EDIT: The Dreamcast is also an odd name, but somehow I always loved it. Bur SEGA Genesis? SEGA beginning? SEGA Saturn? Why not Mercury? Oh man.... And then we had the Atari JAguar. OK.. Why? The GameCube was a great fit for the shape of the console though. Another good one.... OH and Xbox One...

" Gaming was usually associated with young boys " To Nintendo of Japan maybe but by then Nintendo America really wanted that to change, a lot of Gameboy marketing focused on adults and girls.

Living in Europe I never really got to see many American commercials. So I'll take your word for it =) It's part of the past now though and I don't think it's such a bad name. There are worse.

Its an important name and in tandem with the system its perfectly fine now that it has its own music but in hindsight, wouldn't have been an issue if it was changed.

The Polygon article even brings up that in the long term NoA wanted, and did, market to girls and adults, at launch is really the only time they only marketed to boys and not to adults.

Today it would be Game Person.

As a kid I always thought Game Boy was a weird name and assumed there had to be a super pink flashy Game Girl system somewhere but I found out later that no, they really did name it that worldwide.

Weird name but I’m glad they didn’t go with making an awful “girl” version that was super pink and such to continue bad stereotypes (I do know a few games in the US were marketed as such though). The GB/GBA is still one of my favorite systems

It is a bad name, but the handheld didn't succeed or fail based on the name. Look no further than the most obscurely named console probably ever, the Wii.

I don't disagree that it's a bad name. A lot names are inherently bad, but eventually just become "normal" sounding after you're exposed to it enough. "Playstation" is another perfect example. It sounds like a toy for preschoolers. But we're so used to it now, that you just think of "hardcore gaming console" when you hear Playstation.

I totally agree with the Playstation part. Wnted to mention it, but then I saw your comment.

I'm fine with the name "Game Boy". I imagine it was inspired by Sony's "Walkman" which did for music what Game Boy did for video games. And it evokes an image of a smaller, portable gaming experience which is what I'm sure they wanted.

I don't think it's a bad name. Anyway, loved the GB and GBC back in the day, but I don't think they have aged too well, contrary to the NES. The GBA, on the other hand, has aged very well and is my favorite Game Boy.

back then I thought it was a bad name, weird at least. I was okay with walkman, and I only got that link with the internet