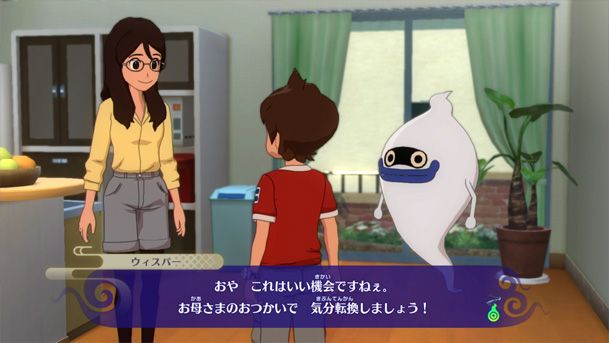 Check out the site for more screens and art

The official Japanese site for Yo-Kai Watch 4 has been updated with a handful of new details. Check out a full rundown of the info below.

- Hailey Anne Thomas and USApyon appear in the game, but it doesn't seem Hailey will be playable
- Keisuke (Natsume’s brother) and Ayame are in the game
- newly-confirmed Yo-Kai include Kyushii (Lightside), Zukkyushii (Shadowside), Hareonna (Lightside), Ameonna (Shadowside), Ungaikyuu (Lightside and Shadowside), and Hinoshin (Lightside and Shadowside)
- two new characters include Itsuki and Tae
- the game includes a strange underground where you can find Lord Enma’s Palace
- this is where the ruler of the Yo-kai world resides, but the current ruler is Kaira, not Lord Enma
- the game begins Nate hanging around in his room when his Mom asks him to run some errands
- once he’s done, Nate notices that Whisper is behaving strangely, and finds out he's been possessed by Hungramps
- Nate then sends Jibanyan to fight the Yo-kai and free Whisper
- afterwards Nate goes out and ends up meeting Katie, but you find out it's actually Mimikin posing as her
- Whisper checks his Yo-kai Pad and sees that lots of Yo-kai are gathering at Mt. Wildwood in search of treasure
- Nate ends up finding a mysterious key that opens a door to the world of Natsume
- the game has 6 playable characters, and you can strengthen them thanks to their Skill Trees
- you’re free to choose how each character will grow by selecting which branches to focus on
- you will need to make sure your Yo-kai Watches are well powered up if you want to get the upper hand in battles
- once you have selected a character to strengthen, you have to select the branch to power up
- branches include Heart, Technique, Body, Bewitching, Friend, and Love
- Stopwatching lets you check out details about your opponents and your allies both before and during battles
- this can also be used to switch party members and use items
- Stopwatching has 4 functions:

- befriending Yo-kai is done via a gameplay system known as Konkatsu, with a character called Konsaru
- during battle, you can collect the “soul” of enemy Yo-kai, and then, you bring that “soul” to Konsaru
- Konsaru will trade the soul for a Yo-Kai's Ark
- Konsaru provides 4 services:

- each world has its own Crank-a-kai
- you can use coins obtained from various places to use the Crank-a-Kai and get Yo-kai
- once you’ve found a Crank-a-Kai, it will automatically appears in Gachaland, so that you don’t have to travel to each world
- each time you use a Crank-a-Kai, you get Gacha Points that you can then trade for various prizes
- if you tap the Yo-kai Ark toy distributed in theaters, you can unlock a special item in-game: the Kokusou Nekotama