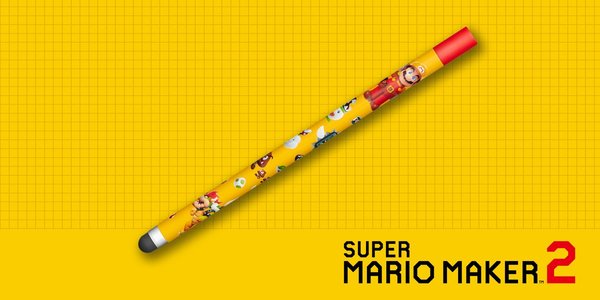 Nintendo announced a Super Mario Maker 2 stylus for various regions around the world, but no announcement was ever made for North America. While many were holding out hope for a surprise reveal, that's not going to be the case. A Nintendo rep has told USGamer that there are no plans to release the stylus in North America. This seems like a very odd decision, as I think most Super Mario Maker 2 players would rather drag a stylus across the Switch's touch screen, rather than their smudgy finger.

Come on, NOA. I will pay money. Why do you hate my money?

I know we can easily find another Switch-compatible stylus, but it bugs me that there are neat pre-order bonuses for this game in so many countries, but nothing I've heard of for North America. I would especially like the steel-book case, but the stylus would have been nice, and quite practical.

Because Pre Order Bonuses were highly criticized and for good reason. They're just little knick-knack incentives to get you to buy a game before it even has a reception.

While I do think Nintendo should produce more official Styluses, this SMM one is just tacky.

You're essentially correct about what pre-order bonuses are and what they do, but when the game is a pretty safe purchase (as I believe Mario Maker 2 is) a pre-order bonus does make the deal sweeter.

No styles no online play with your friends. Same old nintendo

The more things change the more they stay the same.

I foresaw this conclusion since the day it was known about the stylus. Previews are also noting that the controls for editing in handheld mode using buttons is very uncomfortable and not optimal. So unless you like struggling with your fingers, then it's time to go buy a cheap Chinese phone stylus to pick up the slack for Nintendo of America's incompetence.

This also should have, in fact, been bundled along with the game, and not used as a pre-order bonus. People forget when they used to bundle things for games like WarioWare Twisted! and Pokémon HeartGold and SoulSilver free of charge because it either was crucial or enhanced the experience. But we're in Furukawa's Nintendo now... A Nintendo that's more greedy than ever before. Pay for online so you can NOT play with your friends... It blows the mind to smithereens.