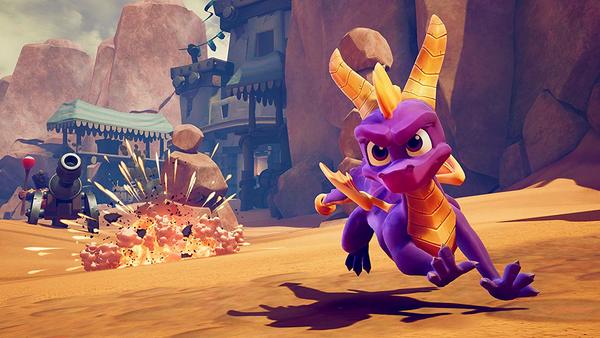 We've got a very special double-rumor for you today, and the source is...us! We have a tipster who's reached out to us to share this information, and we feel quite confident in it. I've gone through the source's previous tips to us over the years, and I'll be damned it they weren't spot-on. We're talking about tip after tip sharing inside info, and they all panned out.

As I said, this is a double-rumor, but both tidbits pertain to Spyro. First up, we hear that the Spyro Reignited Trilogy is going to make its way to Switch. Many fans saw this as a given, especially considering how Nintendo UK had an entire page dedicated to the game on their online store at one point, only to be yanked quickly after. It seems it'll finally be time to talk about that port, as it's set to hit Switch on Sept. 3rd, 2019.

On top of that, Spyro will be swooping in on the upcoming Crash Team Racing: Nitro-Fueled as well. He'll be tucking the wings in for a stint in a kart, becoming a playable character. We're not sure about the specifics on how to obtain him, and instead only have base knowledge of his appearance as playable in the game.

You won't have to wait long for confirmation on these tidbits. Both are said to have reveals coming at this year's E3, so we'll find out next week!

HUGE thanks to our anonymous source for the info.
Rating: 10

That Spyro in CTR one isn't TOO far-fetched, since he was playable in the GBA version of CNK and this seems to have all the CNK tracks and characters playable in addition to the CTR ones.

Was there any reason given why we didn't get Spyro for Switch when it came out for other systems?

Probably needed more time to optimize it for Switch. Could also be related to timed exclusives.

Likely for the reason any major game would take time to come out then: the Switch simply didn't exist when this game started development and you can't tack on a new system out of the blue like that. It would take time.

Good question as it looks like development may have started post Switch launch. This is from Wiki: Discussion around the relaunch of Spyro began as early as 2014. In a July 2014 interview with The Daily Telegraph, Sony Computer Entertainment CEO, Andrew House stated that his team was considering bringing Spyro back. House stated that he believed video gamers would be interested in revisiting a character from their youth.[6] Later that same year, Insomniac Games CEO Ted Price also stated that making a new Spyro game was a possibility.[7] In 2017, developer Vicarious Visions stated that they were aware of how high the popular demand was for a relaunch of the classic Spyro. In a statement they said, "just keep asking".[8] Spyro Reignited Trilogy was officially announced on 5 April 2018 and was originally going to be released on 21 September 2018 for PlayStation 4 and Xbox One, before being delayed to 13 November 2018.

I seriously cant afford all the games coming to Switch. Why is the Switch so awesome. Too many 3rd party games...

Can't wait for it if this is true!

There's nothing in the rule book that says that Dragon can't drive a go-kart.

Thank all that is fun that this rumor started again, if only to show the interest is still there.

I really want this for Switch!