Cadence of Hyrule's rhythm aspect can be turned off 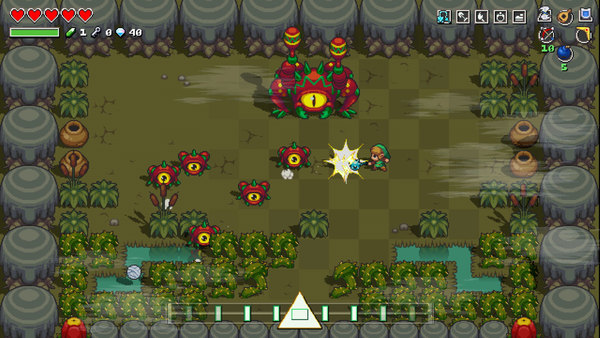 During the E3 madness, I put out a video featuring gameplay and my personal impressions of Cadence of Hyrule. That video included a tidbit about turning off the rhythm component of the game, which is actually an option the developers provided. Here's how to make that happen.

This changes the gameplay so that the enemies ignore the game's music, there's no beat meter, and you don't have to move on-tempo. You still hop around, as do the other characters, but things play out more like a roguelike such as Pokemon Mystery Dungeon.

That's great. I absolutely hate any gameplay that relies on rhythm. But with this option, I enjoy the game.

I can't imagine playing a game based on Crypt of the Necrodancer without the rhythm gameplay.

Spoiler
There is a unlockable char in CotN that plays like this, and it's boring, IMHO

That’s really cool. I do think taking away the rhythm element completely strips CotN of what makes it so special but I’m sure there are plenty of people who don’t like or just can’t play rhythm games but are interested in everything else about Cadence of Hyrule so it’s a great option to include.

Animal Crossing: New Horizons will allow you to move users and save data to another Switch "later this year"
Feb 21, 20:36 by ridleysaria Feb 21, 20:11 by enthropy
Mortal Kombat co-creator says having the series represented in Smash Bros. Ultimate would be 'a really cool thing to see'
Feb 21, 20:11 by tmtigran
The Legend of Zelda celebrates its 34th anniversary
Feb 21, 19:39 by pajob
Shin'en discusses why they went with voxels for The Touryst, and playing with the "absence of things" to create a special look
Feb 21, 19:36 by pajob
Musician St. Vincent says she's put 300 hours into The Legend of Zelda: Breath of the Wild
Feb 21, 19:28 by kendricklamario