Nintendo hid a reference to Zelda: Ocarina of Time's "Song of Storms" in Super Mario 64, and it's in plain sight (UPDATE) 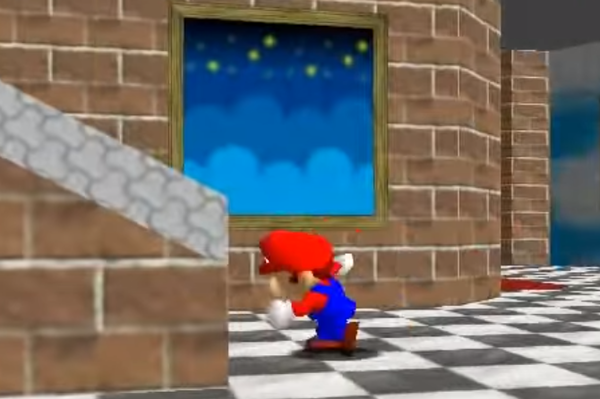 I am such a huge fan of Easter eggs in games. I just love the idea of developers sneaking in nods to other games, pop culture topics, and more. Turns out Nintendo is a fan of Easter eggs as well, and this one has taken quite a long time to discover.

The image above features a painting found in Super Mario 64. We've all passed it a million times, but never really thought mcuh of it. Twitter user Hitei ran by it plenty of times as well, but one pass gave him moment to pause. He noticed that he was speeding by a major Easter egg for all these years. 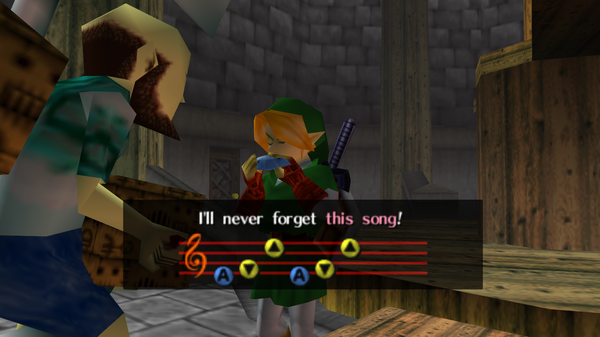 Both Super Mario 64 and The Legend of Zelda: Ocarina of Time were in development at the same time, but Super Mario 64 came out first. Nintendo decided to sneak in a reference to Ocarina of Time that players wouldn't ever catch at first, because it would be some time until Ocarina of Time released. The painting in Super Mario 64 is a visual representation of the notes in Ocarina of Time's 'Song of Storms.' The spacing on the first/second not might be a bit too large, but I think there's too much other evidence in the comparison to have this be a coincidence.

I mean, I'm absolutely flabbergasted. In all my years of chronicling Easter eggs for GoNintendo, this has to be the best one I've ever seen.

UPDATE - Seems there's debate as to whether this is an Easter egg or coincidence. We'd love to know what you think. Cast a vote in our Twitter poll!

Alright, looks like we need a poll on this one! Do you think the Super Mario 64 stars/Ocarina of Time notes comparison is an Easter egg, or just wishful thinking? Check out comparison images here. https://t.co/EB8oXJfGi9

Fuck me gently with a chainsaw. That's ridiculously cool.

I really don't think this is a reference. It's just a vague coincidence. It doesn't even match the song exactly.

I do agree that the spacing between the first and second note are off, but there's so much that fits in.

Then again, maybe I'm crazy! I think it might be time to do a poll.

Everyone, upvote RMC's comment above so RMC has to read it on the podcast!

I think this painting is just a coincidence, but it'd be really neat if it was intentional. Maybe a developer can catch wind of this and comment.

It would certainly be awesome if it was a legit easter egg, but I really just don't think it is!

It looks pretty intentional to me, but it could just as easily be just a step-and-repeat.

What if song of storms is the Easter egg, paying tribute to random Mario64 painting....
Hmmm...

I think it's a coincidence. The set of stars is shown twice because the texture is repeating to save texture space.

Here's the actual texture ripped from the game and enlarged: https://i.imgur.com/yT80Y6O.png

As Hawk said below, the texture is repeating twice to save space, BUT... that doesn't mean it's a coincidence. When repeated, the background stars seem to form straight lines, suggesting the appearance of a musical staff. Factor in the clouds and this might be intentional.

That could be Saria’s Song as well 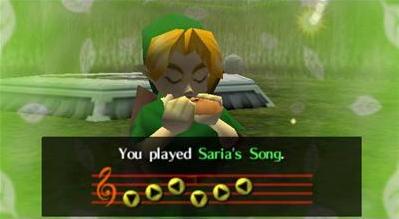 That could be what you want actually, I think that’s just a confirmation bias.

Not only are the stars/notes not distributed evenly on the vertical axis in the song of storms but at the time of SM64's release, Ocarina of Time was in a VERY different state from the final product. It was still going through that phase of experimentation where Ganon's castle was still a hub world and hyrule divided in levels, just like SM64's overall design. That or they had already moved on to the early phases of the more vast 3D Hyrule that was displayed around 1996 showings of the game in development. Whatever the case may be, the game was far from its final version and I highly doubt the character of the windmill guy OR the song of storms were already part of the game at that time.

If anything, I think it would be more plausible that the song of storms IS the easter egg in Zelda rather than the other way around, given that Zelda came out much later. But still I think it's just a passing resemblance, not even a like for like between the two, and therefore not an easter egg at all.

Someone else kinda beat me to it but I'll say it anyway.
The real reason why this can't be the Song of Storms or any other Ocarina of Time song is because in October 1996, a month after Super Mario 64 was out in North America, "Zelda 64" was in nowhere near a refined state. The trailer shown off that month was the famous "Triforce" trailer, and the game did not even make use of the C buttons in the UI. In fact, here's what The Cutting Room Floor article says about this point in development:
"Though Ocarina of Time is famous for time travel and the dual worlds of Child and Adult Link, developers did not conceive of the game mechanic that would contribute to its namesake until halfway through development. At this early stage of production, only Adult Link could be manipulated by the player."