Mario & Sonic at the Tokyo 2020 Olympic Games lets you use both motion and button controls, gives characters appropriate outfits for their events 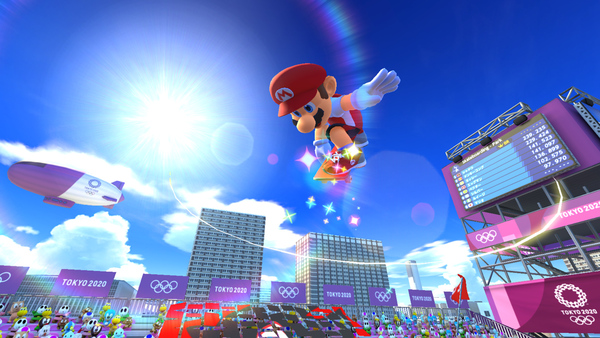 “Motion control is definitely featured in this game. We are really excited to feature and utilize great parts about the Switch for this game. For instance, you don’t just have to use the Joy-Con. Obviously the Joy-Con is going to be a big part of the game. For instance, for surfing and skateboarding you’ll use the tilting mechanism to move the characters during the game, but also you can enjoy the games using the button mode…so there’s many, many ways of playing a lot of these mini games for this new game.

For example, if you’re using the Joy-Con mode, you can enjoy disc throwing as one of the games and you could actually experience throwing the disc, by using your body, which is a big part of motion control. There’s also boxing that you can experience – really experience the punching motion.”

One big chance with this installment in the series comes with costumes. Characters will now wear outfits that are appropriate for the sport they're in. Yes, that includes Mario as well.

“Each of the characters are wearing different costumes, depending on the sporting event they are competing in. For instance, in the previous games Mario would always be wearing his overalls, even if he’s in water, but this time, we changed that, we actually gave him trunks, so he can actually swim in the water correctly.”

is so weird seeing Sonic and others characters in different clothes then usual.