SOOOOOOOOOOOOO much to learn!
21 June, 2019 by rawmeatcowboy | Comments: 1 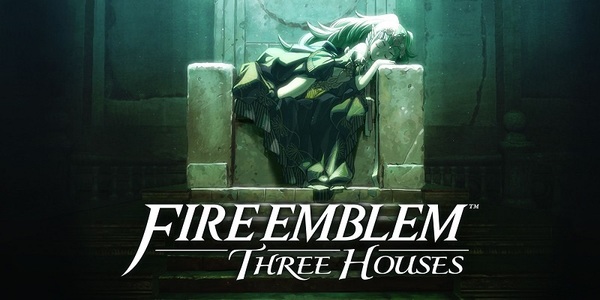 This week's issue of Famitsu had yet another massive feature on the upcoming Fire Emblem: Three Houses. Get ready for another huge breakdown of details, which you can find below. You can also check out a brand-new batch of screens and art here.

- the game takes place in two different “eras,” one in the Officer’s Academy, and one 5 years in the future
- in the future, former friends are now enemies on the battlefield
- in the future era, Edelgard did become Empress of the Adrestian Empire
- Dimitri is the one who changed the most, as his whole appearance changed, and he's embraced the darkness within
- Claude has become more handsome and bold than before
- the war in the future opposes the leaders of the three countries which used to be the house leaders at the Officer’s Academy
- depending on the House you pick in the first era of the story, you'll get a complete different story for the second era
- class leaders you did not side with, as well as the students of their respective houses, will appear as enemies
- in the second era, during the week you spend your time training, and on the weekend, you can enjoy various activities
- spend your time preparing for large-scale battles which take place at the end of each month/chapter

Thales: the leader who Soron and Cronje obey. He’s the central figure of this group of villains, and in order to carry out his plan, he plans various secret maneuvers behind the scenes.

Soron: he looks like an old mage, and is an extremely dangerous individual.

Cronje: at first glance, she looks like a cheerful young woman, but she’s actually pretty childish, and has a cruel side.

- take part in various activities at the Garreg Mach Monastery during the weekend
- you can go fishing, cultivate plants and vegetables, go shopping, cook, and more
- you can also spend some quality time with the other characters, in order to deepen your relationship with them
- this will grant various bonuses and effects in battle
- you can scout students from the other houses, providing the conditions are met
- some characters cannot be scouted, which includes the house leaders
- the students successfully scouted from other classes will show up as allies during the second half of the game
- one way to deepen your bonds with other characters is to give them gift
- if the recipient likes the gift, then the support value will increase, and the student will be more motivated to study
- gifts include items bought at the market, flowers you grown, items found while taking a stroll
- one of the gifts is called “The Messenger Owl’s Feather,” and all characters will be delighted to receive one
- this is the item to use if you want a really deep relationship with someone
- this feather seems like it's related to Feh, the Fire Emblem Heroes mascot
- during your strolls in the Monastery, you will sometime come across lost items
- if you go and bring it to its owner, then the support value will increase as if you had given them a gift
- the game doesn’t tell you which character a lost item belongs to, but you can take a guess based on details about the item
- a good way to deepen your relationship with a character is to have a cup of tea with them
- during the weekend, or on the birthday of the character, you can take part in a tea ceremony
- you'll choose a topic to discuss while sipping tea, and you're supposed to pick a topic the character will like talking about
- the longer the conversation goes on, the bigger the boost to the support value, and the deeper your bond will grow
- if you mess up, it will not have a negative impact on the support value
- if you happen to fail a tea ceremony, you can always brute-force your way through with some nice gifts

Caspar (voiced by Satoru Murakami)
Personal Skill: Bellicose. Grants Avoid–10 if there are enemies nearby in battle;
Crest: none.

Linhardt (voiced by Shun Horie)
Personal Skill: Dozing off. Recovers up to 10% of HP when not taking any action during a turn;
Crest: Cesleen’s Small Crest. A crest said to have been handed down by Saint Cesleen.

Petra (voiced by Shizuka Ishigami)
Personal Skill: Laws of the Hunt. When enemy’s HP are below 50%, grants Critical +20;
Crest: none.

Annette (voiced by Takako Tanaka)
Personal Skill: Hard Worker. Grants Strength +10 when using the support command;
Crest: Dominique’s Small Crest. A small crest said to have been passed down by Dominique, one of the 10 Heroes of Fodlan.

Sylvan (voiced by Makoto Furukawa)
Personal Skill: Womanizer. If female units are in adjacent spaces in battle, increases damage dealt to enemies by 2, and lowers enemy attacks damage by 2.
Crest: Gautier’s Small Crest. A small crest said to have been passed down by Gautier, one of the 10 Heroes of Fodlan.

Ingrid (voiced by Manaka Iwami)
Personal Skill: Female Knight. Grants Strategem Power +3, Strategem Hit Rate +5.
Crest: Daphnel’s Small Crest. A small crest said to have been passed down by Daphel, one of the 10 Heroes of Fodlan.

Marianne (voiced by Sawako Hata)
Personal Skill: Animal Lover. When flying or horse riding allies are in adjacent spaces, recover 20% of max. HP at the beginning of a turn
??? Crest. She seems to have a crest, but we don’t know anything about it.

Leonnie (voiced by Sakura Nogawa)
Personal Skill: Sore Loser. When male allies are in adjacent spaces, increases damage dealt to enemies by 2, and lowers damage received from enemies by 2;
Crest: none.

Statues of the 4 Saints of Fodlan

- if you pray at one of the 4 statues, you can get a bonus that will further help with the growth of your units
- you need spend Fame Points earned by completing quests and taking part in battles to do this
- the more fame you gather, the stronger your units will become
- the kind of bonus you get depends on the Saints you decide to dedicate your prayers to
- praying at a statue increases the amount of Skill EXP gained during personal teaching
- the more bonuses you use, the more fame you need
- you can get bonuses including:

- choral practice is an activity that can only be used once a day
- you can invite two characters to sing along with the protagonist
- this will increase the support value of all 3 characters, and also get Skill EXP for the Faith Skill
- some characters are particularly gifted when it comes to singing
- having them take part in choral practice will result in an increase of Skill EXP received
- learn white magic and various other related skills as your Faith skill level goes up
- you can get Skill EXP that you can normally get only during weekday classes

- the Monastery receives various letters from characters looking for some life advice
- they have problems that needs to be solved, and you can help them by selecting one of three possible answers
- if you select the right one, than the support value with that character will increase
- it’s impossible to find out who the sender of the letter is before you give your answer

- find products from the Fodlan continent, including weapons, recovery items, Guilds to hire Knights from, and blacksmiths

- buy various items from traveling merchants that were collected during their many travels
- you can get all the necessary items for the activities in the Monastery from them
- these items cannot be found in regular shops
- each traveling merchant have their own set of items
- for example, one merchant in the south sells fish baits and tea leaves

- weapons use the durability system, and the blacksmith can repair that damage
- if you don't repair a weapon and the durability value reaches zero, the weapon breaks and you cannot repair it
- a broken weapon will have a significant negative impact on your fighting power
- you can have the blacksmith craft you some weapons, but only if your teaching level is high enough
- blacksmiths need payment and crafting items to create weapons for you

- this is the special move of a given unit, which is extremely powerful and can deal lots of damage
- there’s no follow-up attack, and using a Combat art puts a serious dent in the durability of a weapon
- combat arts are learned by raising your skill levels
- if the weapon is the same, a combat art can be used regardless of the equipment currently equipped
- combat art examples include:

Back Blow (Martial Arts skills). When used, the unit goes back on space after attacking, allowing you to have other units move there (to keep attacking, protect the unit, etc.)
Might = 6
Hit Rate = 10
Avoid Rate = +30

“Legacy of the Heroes” weapon

I wish they hadn't given away that you become enemies after the time-skip. That would have been a neat twist...