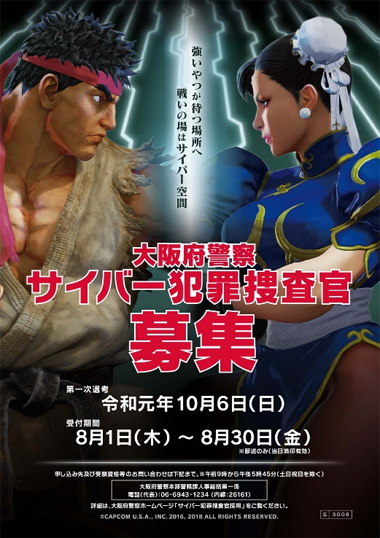 Capcom is teaming with the Osaka Prefectural Police force to help recruit cyber-crime investigators, and they're doing it with Street Fighter. 3,000 flyers will be distributed, and 1,000 posters will be plastered around Osaka Prefectural Police stations and police boxes, as well as at train stations, starting today. Capcom shared a statement on the unique collab, which you can find below.

"Selected for the brand's powerful image, its popularity among a broad range of age groups, and the affinity that esports has with cyberspace, the characters will be featured in investigator recruiting advertisements with the aim of boosting awareness of and the number of investigators specialising in cyber-crime - a field that has seen a conspicuous rise in the number of incidents in recent years."

Capcom has run numerous campaigns with the Osaka Prefectural Police over the years, featuring characters like Mega Man and more. I guess the collaborations have been a success, which is why we're seeing things continue with Street Fighter.