Includes content from the original Columns!
17 July, 2019 by rawmeatcowboy | Comments: 0 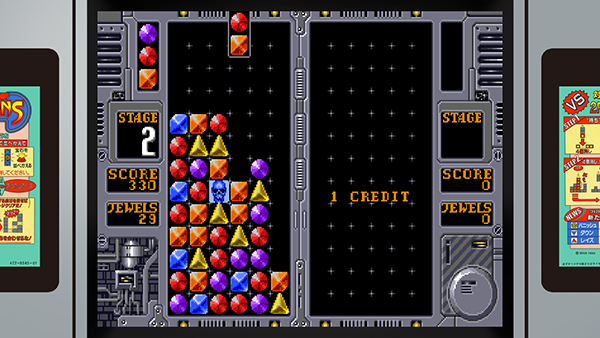 SEGA has opened up the hub page for SEGA AGES: Columns II: The Voyage Through Time, which we took a look at yesterday. This new hub page gives us a full breakdown of the game and what tweaks are being offered. Check out the complete rundown of information below.

Enjoy two game types with “Flash Columns,” a stage clear-style game where you match jewels to eliminate them, and “VS Columns,” where you aim for chains to force up the opponent’s field. By eliminating the skull that appears after a certain period of time passes, the floor will rise and the field will get smaller.

The following additional elements have been added to Arcade Mode:

A new mode original to the Switch version of Columns II. The basic rules are the same as Arcade Mode’s Flash Columns, but rather than a stage clear-style game, it is an endless play-style game. After a certain amount of time passes while playing, jewels will be added to the bottom row so that the floor gradually rises. Also, by eliminating any flashing jewels, all jewels of that same color will be eliminated.

In this mode, you can enjoy endless play based on the origin of the series, the original Columns (Genesis / Mega Drive version). When you start the game, you can choose from three background songs.

*This is the same Columns included with the paid “Game Pack” add-on for the Yakuza 0 Companion App for PS Vita.

Compete against players online across the country in Arcade Mode’s VS Columns.

Check the status of the stages you have cleared in Arcade Mode’s Flash Columns. Depending on your level of achievement, you will be able to see brief profiles for Round Girl and Round Boy, the characters that appear in the opening movies of Sega Ages titles.