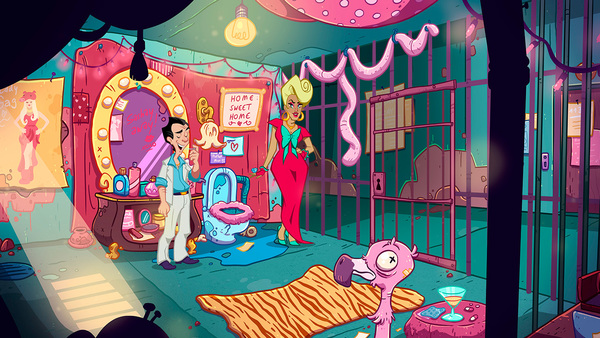 Leisure Suit Larry: Wet Dreams Don’t Dry disappeared from the Switch eShop in North America the other day, but it has since returned. As we guessed, there was indeed an issue with the ESRB rating.

The game has retained the same rating, but a particular scene had to be censored. It's actually just one slide in a particular scene, which doesn't impact gameplay in any way, and moves by extremely quickly. Turns out the image was a bit too graphic for a Mature rating, which is why the ESRB took issue when they caught it post-launch.

So the ESRB missed a scene that would have pushed the game past a Mature rating so it got altered to allow it to keep that Mature rating. There are far worse reasons that games get censored, and I'm glad it wasn't Nintendo who had this happen.

So the ESRB missed a scene that would have pushed the game past a Mature rating so it got altered to allow it to keep that Mature rating. There are far worse reasons that games get censored, and I'm glad it wasn't Nintendo who had this happen.

The ESRB doesn't see the full game anyway. Developers and publishers submit videos to the ESRB showing examples of potentially rating-increasing content, someone at the ESRB watches the video, and they decide on a rating, tags, and, if the game is a major enough release, a paragraph on the ESRB website about the most important things to know before buying the game.

For something like a Leisure Suit Larry game, there's so much the ESRB needs to know that either they'll fail to find everything or, more likely, the video is missing something.

An example is Rain City, that point-and-click game released a month ago. One of the ESRB tags concerns drugs and alcohol use (tobacco included, for the record). Early in the game--early enough that it's in the demo--you see a bunch of NPCs smoking and drinking beer in an apartment room appropriated into a bar. The player character even buys a pack of cigarettes from a vending machine to give to an NPC who really wants something to smoke. The ESRB didn't have this tag for Rain City because, most likely, the publisher didn't include that for the ESRB to see.

I was going to say that I wonder if missing a day or two cost them some sales, but in all likelihood, this story has given them more press abd attention than just coming out normally.

Any information on what exactly is censored? I just finished the game (EU version, two patches so far) and would like to know if I've seen the original.

I don't know exactly what was censored yet but I know it was something to do with the Instacrap website.

Nevermind, found a screenshot. Well, it's not exactly classy, but still, I'm amazed that this stuff really is a problem ...