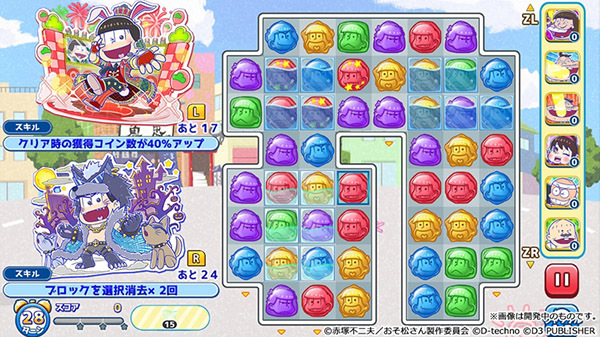 You can check out the official Japanese site for Motto! New Puzz Osomatsu-san: Shinpin Sotsugyou Keikaku right here, and read up on gameplay details below.

What kind of game is it?

A match-three puzzle game with simple controls. Choose two “Oshimatsu” and utilize their skills.
An original story will progress as you clear each stage.
There are three stages of graphics that evolve as your affection level rises.

Over 500 bonus voices. There are over 500 bonuses voices that can only be heard in the Motto! edition of the game. The voices you collect can be played back at any time in the “Voice Gallery.” Of course, all the voices from the smartphone version are also included.
Additional original story. More story has been added to the game map.
Almost all the content from the smartphone version. That of course includes the main scenario, as well as almost all of the time-limited events.
Switch version playable in TV mode, table mode, and handheld mode. In handheld mode, you can play the game using the touch panel like the smartphone version. The PlayStation 4 version is only playable with a controller.