It just keeps getting more impressive
20 August, 2019 by rawmeatcowboy | Comments: 6 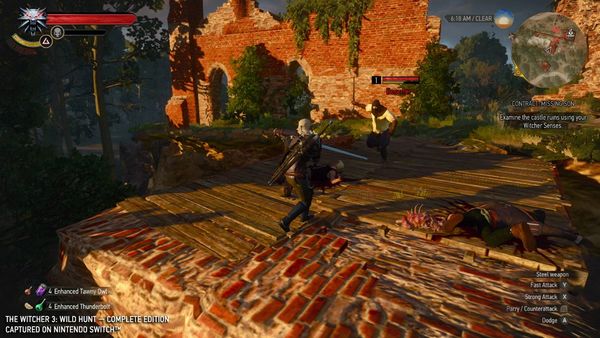 Seeing The Witcher 3: Wild Hunt Complete Edition on Switch is a technical marvel. It must have taken a ridiculous amount of time to get that port up-and-running, right? In an interview with Eurogamer, CD Projekt Red's Piotr Chrzanowski says all in all, it actually took a year.

Over a year now. Well it depends on whether you want to add the business stuff, but then I would say it's around 12 months at this point.

A year is nothing to sneeze at, but to think that the entire game, from first word of the port to now, took just a year is pretty crazy!

Following that, we also learn that the Switch version of The Witcher 3: Wild Hunt Complete Edition is going to have at least one leg up on its PS4/XB1 counterparts. Believe it or not, the Switch version will see loading time cut by at least 40% compared to the other versions. This likely has to do with lowered texture quality and geometry, but it's still a nice improvement!

The loading times definitely aren't shorter. Digital foundry tested them on that video they put out about the port. The switch portable mode was about 12 seconds longer when traveling to one of the busier areas.

The docked version might see a slight improvement but 40% under ps4/xb1 seems a little farfetched. As far as i'm aware no one has had any hands on of the docked mode yet.

There is the possibility that Digital Foundry is testing a version that is not final. Since the end of development can lead to much optimisation, maybe the final version is the one they are talking about.

Usually the demo shown at at conference is not the latest build. The real test will be once we have the retail version to do the proper comparissons

According the video it was a private showing to industry people so i'm assuming and it was confirmed to be a newer build than what was shown off at e3.

Famitsu were the ones that reported the 40% faster load times, i dont think they somehow got there hands on the final version outside of this demonstration. It'd be one thing if CDPR reported the load times, or other publications listed it as well.

That they got the game to run on Sitch and that they have the game on ONE single cartidge is impressive enough in itself!

Has it been confirmed that this is without any additionnal download ?