Nekketsu Kouha Kunio-kun is a popular action game series that debuted in 1986. And now the “win-through fighting” from the series’ most popular title Downtown Nekketsu Koushinkyoku: Soreyuke Daiundoukai returns with significant enhancements!

While the controls remain the same, all other aspects have been significantly enhanced. There are over 180 characters, over 250 special moves, over 30 teams, and more.

The cute pixelated characters of yesteryear flood the screen for a major brawl. Up to four players can play together, so fight alongside your family and friends!

Additionally, you can play against players all over the world in online battles. Climb your way to the top by mowing down rivals in major brawls involving the whole world.

A few days after the Great Athletic Meet held by Todou of Reihou Academy, a poster reading “A Melee Tournament will be Held” was posted in town…

Meanwhile, there have been repeated incidents in which high school students in the area have been attacked. Due to the timing, everyone was suspicious that the attacks and the melee tournament were somehow related…

In order to uncover the truth of the matter, Kunio, who also found it suspicious, gathers up the strongest members of his hot-blooded high school to participate in the melee tournament…

Select a character to fight as from your chosen team.
Win the four-man battle royale.
Utilize dropped weapons, terrain, and special moves.
Survive until the end to win and advance to the next round.

Single-Player – A mode in which you fight against CPU characters in an original story prepared for each high school. Five teams have been added from the previous work for a total of 30 teams to choose from. You may even be able to experience the true story of the maniac team that we previously knew so little of.

Free Play – A mode that you can enjoy to your heart’s content. Freely play the game by setting your own battle rules, number of battles, time limit, and so on. Up to four players can play together, so play alongside family and friends.

Online Battle – A mode in which you fight against players around the world. You can set your own rules and such in great detail, or you can join a room with conditions that meet your liking. If you cannot find a room you like, you can create your own.

Music Gallery – A mode in which you can listen to the background music from the game. Listen to nostalgic and lovely blip blop sounds of yesteryear.

New Items – Countless new items have been added. Utilize these items to expand your strategy. There is even a “Bamboo Shoot” item that makes you become huge.

New Stages – New stages have been added. Mechanics have also been added to each stage. Determine the best strategy for each stage.

Customization – Edit your own original team. There are prepared characters that you can edit, allowing you to create a team all your own. Items placed in the stages can also be customized.

River City Melee Mach!! will launch worldwide for Switch on October 10th, 2019 for $13.99, as confirmed by publisher Arc System Works. 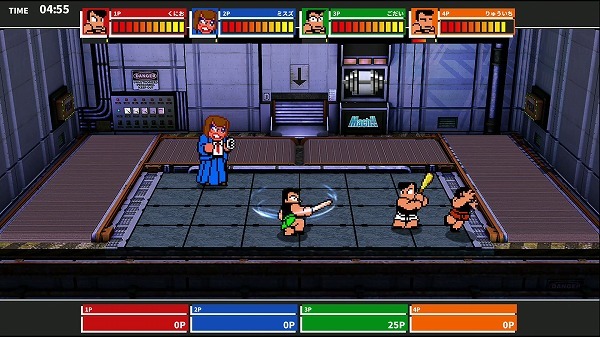 I just want WayForward to do one of these but with River City Girls' graphics.