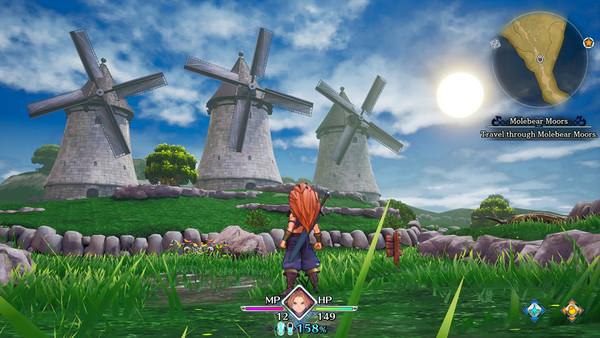 Trials of Mana is making its way to Switch as a fully-revamped 3D remake, which is quite a far cry from the original release on Super Nintendo. Square-Enix is hard at work on making this a top-tier remake, and that goes for all elements, right down to the translation. In an interview with USGamer, producer Masaru Oyamada discussed the fan translation of the original title, and how it motivated the team working on Trials of Mana now.

Well, the localization team took a look at the translation and the first thing they said was, "We're going to show them up." I'm sure that the people that worked on the pirated version worked with the best of what was available to them, but we really wanted to do as good of a job as we possibly could.

This remake is looking really good. I would love it if they did this for Chrono Trigger.

I’d be shocked if they didn’t. It makes too much sense not to take what they have here and apply it to Chrono Trigger

No. Bad. Uh uh. Squeenix doesn't have what it takes to remake a game like Chrono Trigger. The only acceptable remake would be a completely faithful remake where the only key differences are new sound effects, a fully orchestrated OST, and artwork done by Akira Toriyama's Bird Studio. Squeenix doesn't have the integrity to do CT right.

It was a port, yes. But an ENHANCED port which added many new things that weren't in the SNES and PSX versions (and to tie it better to Chrono Cross). A CGI remake of Chrono Trigger can work as the DS enhanced version shows.

PC and mobile phone ports say hi. Barely functional messes, the mobile phone version never recovered completely and the PC version still has a lot of problems. Also, the DS remake was 11 years ago and the new content added to the game was boring, repetitive crap. Furthermore an enhanced port is not proof that they can pull off a full remake. Chrono Trigger is special. Unique. Squeenix doesn't have what it takes.

Well when you try cramming console-quality content down to a mobile platform that lacks the capabilities of consoles and PCs because you're chasing the mobile money... And then get the bright idea of porting the mobile version to PCs without optimizing for PCs...

It took the 3DS coming out to fill in the holes of Super Mario 64 DS's controls.

Trails of Mana proves that they can do it. Sooo...yeah.

No it doesn't. You're basing this off of a handful of videos, not the actual game. Wait until it comes out before you make those claims, then remember that most of the original CT development team are currently employed by Monolith, have left the industry or are spread randomly across it with only a few left at Squeenix. There's no one to fight for Chrono Trigger and there's no one to make sure it gets proper funding.

Oh, and the existence of the garbage heap of a SoM remake negates any point you might have with SD3's remake.

Oh, and the existence of the garbage heap of a SoM remake negates any point you might have with SD3's remake.

All the complaints I've seen on Steam were saying the SoM remake was too easy, when the SNES original was the same way.

I'm really loving the gambles SE has taken lately. I hope DQ Builders 2 was successful and that this, Romancing SaGa 3, and Scarlet Grace all pay off. We need some good Japanese role-playing games that are more engaging and less titillating.

Bear in mind that translation is an art form. I have no doubt the new team will be able to produce something real nice, but there will always be naysayers because a good translation is simply a matter of opinion.