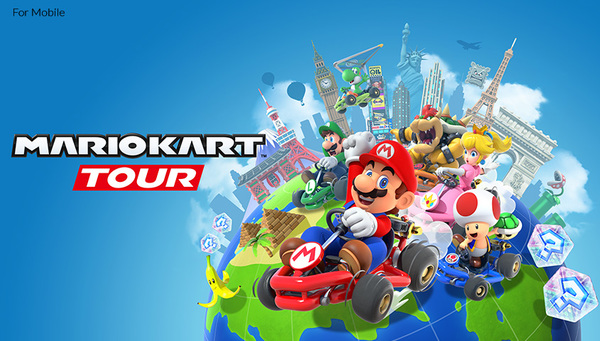 Following yesterday's announcement of Mario Kart Tour's release date, Nintendo has been pumping out all sorts of promotional features and content. Below you can find the official announcement of the game from Nintendo, which includes some tidbits on in-game locations, as well as comments from Nintendo themselves.

3 … 2 … 1 … GO! On Sept. 25, Mario Kart Tour, Nintendo’s newest game designed for iOS and Android devices, boosts out of the starting gate and into the palms of players’ hands around the world. This new Mario Kart game goes beyond Rainbow Road, with special city courses that let players race through courses inspired by actual locations like New York, Tokyo and Paris. A new Mario Kart Tour teaser video and gameplay trailer showing how players can drift and steer their way to victory can be viewed on YouTube. Players who want to be notified once the game is available to download can pre-register now via the AppStore and Google Play.

“For the first time ever in a Mario Kart game, players can drive past giant Warp Pipes while drifting through a New York-inspired cityscape, all with the swipe of a finger,” said Nick Chavez, Nintendo of America’s Senior Vice President of Sales and Marketing. “Whether you’re an experienced Mario Kart pro or just getting your Mushroom Kingdom driver’s license, Mario Kart Tour is a game for everyone that brings some of Nintendo’s most beloved characters into the hands of players around the world.”

In Mario Kart Tour, players can experience the endless racing fun of Mario Kart while collecting drivers, like Mario, as well as karts and gliders. Players can choose which drivers, karts and gliders to use in races across a variety of courses, including new takes on classic courses and special city courses. City courses, special in-game event courses inspired by real-world locations, will be available during specific time periods at launch and beyond. In addition to courses based on iconic locales, some Mario Kart characters will get variations that incorporate the local flavor of cities featured in the game.