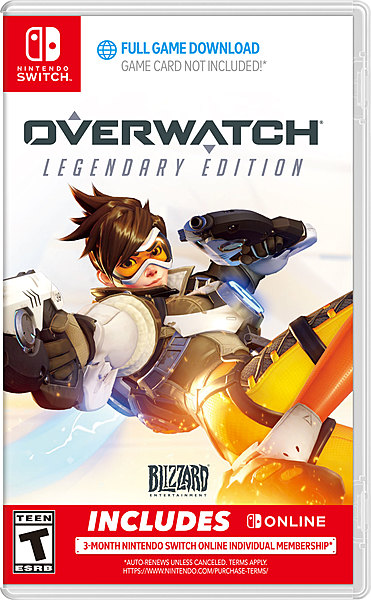 There are two things worth noting about the upcoming release of Overwatch: Legendary Edition on Switch. First thing's first, the physical version of the game doesn't include a game card. It's just a physical box that has a code for the eShop version, which clocks in at 12.1 GB. This was doubly confirmed by the press release for the game. You can check out the blurb from that release below.

Overwatch Legendary Edition for Nintendo Switch will be available in a boxed version (containing a code to download the game) and digital version via the Nintendo eShop for a suggested price of $39.99.

Second, Overwatch on Switch isn't going to have cross-play at launch. It may never have cross-play at all, but Blizzard has said that it's something they'll look into moving forward. Check out their statement on the matter below.

"We've seen how compelling cross-system play can be for our community, and we're excited about the potential. There's still a lot of work to do on both our side and the platforms' side to determine whether this is something that makes sense for Overwatch, and we're keeping an eye on how cross-play systems and technology develop."

OK yeah, this is just silly to not even have a card and a partial update. Heck, it could still fit on a 16 GB card but if it's under 60 dollars MSRP they could do an 8 GB one. Probably due to a very quick release window since carts do take a while to make but it's a bit of a bummer

What a waste of plastic and paper.

I know a few people that pick these up just to "have something on the shelf" but I feel like it's useless. If you're not giving me a physical product inside, why are you even selling it?

Another completely botched physical release. Why even bother selling an empty box?