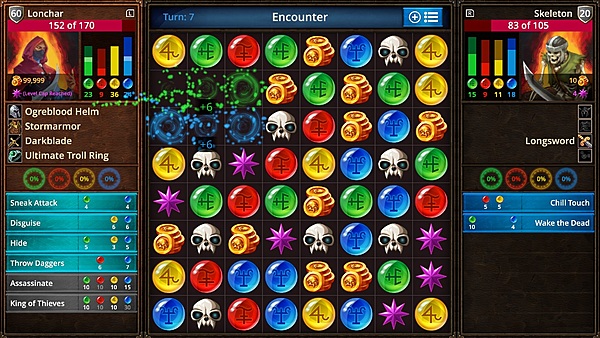 Some who have picked up Puzzle Quest: The Legend Returns are currently dealing with a nasty bug. Something is causing the game to spit out ridiculously overpowered enemies very early on in the quest. These enemies are so tough that you literally can't progress past them, as you're now powerful enough. Thankfully the developer is aware of the issue, and are working to track down a solution. Check out their message below.

Producer for the game here over at D3. Wanted to let you know that we've seen these reports and are investigating. From what we're seeing so far, it looks to be an isolated bug that isn't happening to many players, but is still hitting some people. Good news, most players seem to be just fine. Bad news, it seems to be random so far as to who it's hitting which makes the bug harder to track down and squash. They don't call that enemy a Rogue Skeleton for nothing.

We're not sure precisely what's causing this issue yet appreciate any info you all can give on characters that are experiencing it. Character class, selected items, spells, side quests that you may have done leading up to seeing it, etc. We're grabbing all the info from players that we can see, but concise information will help to track it down quicker.

I know that some of you have tried uninstalling and such to see if a "1.0 non-patched version" or something fixes it, but since there wasn't a day zero patch, that's unlikely to work. We're trying to replicate this bug internally as well and I'll update if we have any workarounds to share in the meantime.

We apologize to players that are experiencing this issue and hope to have a fix ASAP that we can get into the game.

I bought it but haven't played it yet. With my luck I'll get the bug, here's hoping I do not. Nevertheless, I hope the bug gets squashed for everyone's sake.