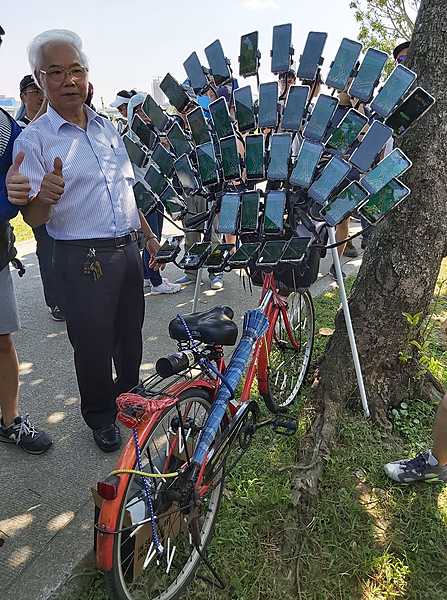 He found fame for his Pokemon GO contraption that let him use multiple phones while riding his bike. He then added more phones to his device, and transitioned it into a wearable mount. He received an endorsement deal with a phone company because of his Pokemon GO fanaticism. Now 70-year-old Chen San Yuan is back, and his Pokemon GO mount is bigger than ever.

As you can see, Yuan is now riding around on a bike that allows him to play 45 games of Pokemon GO at once! The mount is a sight to behold, and will certainly catch the attention of anyone Yuan passes by on the street. The real question is...how in the hell does he see around the phones to ride his bike?!

Why look around the phones when you can look through them? Isn’t it just showing a camera view of what’s ahead of them? Hopefully no Pokémon will get in the way

Do you think he has enough phones?

I don't think he has enough phones.

And to think I've seen people with 3 phones for Pokémon Go. My only hope is those people use their multiple phones for more than just a game.