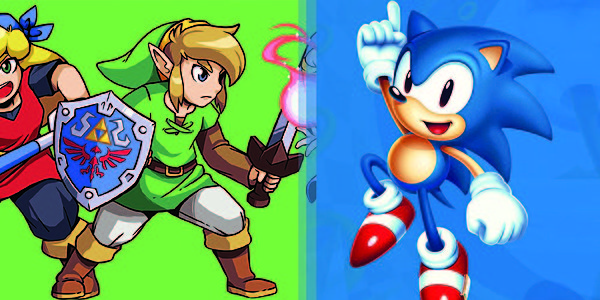 What is an indie game nowadays? There are so many titles made by 'indie' devs, but they reach audiences of millions, and have so many different visual styles it's hard to keep track of. Indie games use to be a very small market available mostly on PC, but nowadays they're as big a part of the gaming scene as any other. In an interview with Nintendo Force, Paul Veer, artist on Cadence of Hyrule and Sonic Mania, shared his two cents.

I think it definitely is harder to describe these days, but I also don’t think it’s really important to make that distinction, at least not for me personally. In the end we all just make games, and recognizing that rather than trying to split up the industry and fight over who is or isn’t AAA or indie is a very good thing if you ask me.

It feels like it’s making collaborations between individuals/indie developers and larger studios possible and more common. And I don’t mean just stuff like Shovel Knight or Undertale being represented in Super Smash Bros. You’re seeing a bunch of smaller studios taking on larger franchises nowadays, with games like Wonder Boy: The Dragon’s Trap, Cadence of Hyrule, Streets of Rage 4, and River City Girls all happening in the past few years. Or even something like Toby Fox doing the soundtrack for Game Freak’s Little Town Hero. I genuinely hope we get to see lots more collaborations like that and I don’t think we would have seen these kind of things if we’d kept separating AAA and indie.

AAA is meaningless now except to old executives who don't know better. Indie games today are some of the best games we've ever had.

Whatever lines are blurred here in the west, I would say is even more blurred in Japan, where both AAA releases and indie physical releases are priced around the same. This is especially if the indie games are marketed toward otaku. In the west, it's still pretty easy to tell an AAA game because it's priced $60 or higher. Indie games in Japan, checking on the eShop over 2019, are priced as high as $75.

Makes me wonder if the pricing is why Steam never caught on in Japan, between the hesitance to buy video games digital only and games going on sale having a much different meaning in Japan than it does here (in the west, games going on sale means there's a promotion going on and nothing more; in Japan, there seems to be a connotation of the games being devalued, as if to say, "This game isn't good enough to be at our intended price").