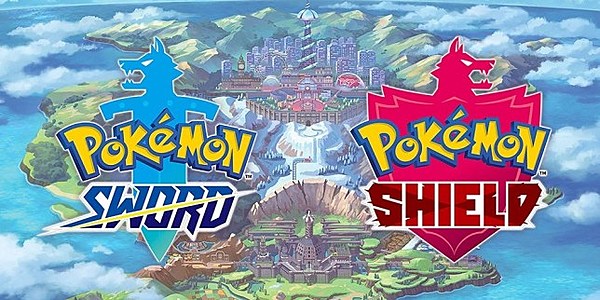 With big video game releases comes big company promotions. Pokemon Sword and Shield has officially launched for Nintendo Switch, and corporations are taking to Twitter to congratulate, promote, and celebrate the games launch. Check out some of the most creative company Tweets below.

First up, is the DOOM Twitter account run by Bethesda Game Studios. This one is a more subtle Pokemon nod. The tweet features a gif of a DOOM enemies eye being torn out with the caption "eye choose you", clearly referencing "I choose you" (the catchphrase from the Pokemon anime).

Next, we have the the Arby's restaurant chain. The companies Twitter account has been known to create fun cardboard creations to celebrate video game launches (although in this case, it's more like 'lunches"). Sobble, Scorbunny, and Grookey look excellent!

Hulu spreads their love of Grookey with the hashtag #GrookeyGang. The only big streaming service currently available on Nintendo Switch is Hulu, so it's nice of them to promote Nintendo's latest big release.

This one is a fun one, as the official Pokemon Twitter account actually gets involved. Atlus U.S.A. posted a screenshot of Persona 5 with Morgana saying "I'm not a Pokémon." The caption for the Tweet wishes for a happy Sword and Shield release day, and jokingly states "Morgana, I choose you!" The Pokemon Company responded to the Tweet, making sure to clarify that Morgana is indeed NOT a Pokémon. 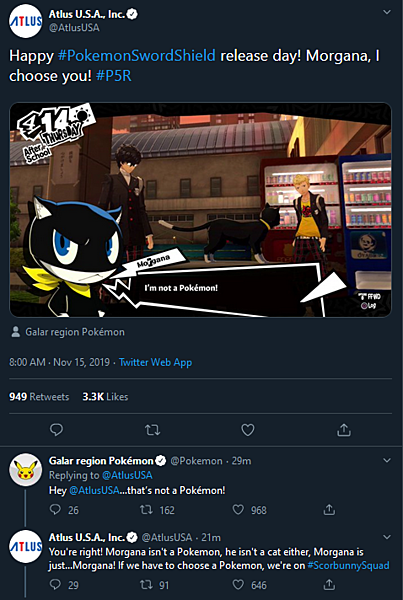 Pokemon can't even escape from the delicious goodness of ice cream. Drumstick expresses their Starter choice of Grookey in this Tweet, and rightfully so. He uses a stick after all.

Yo, champ in making! We’re excited to explore the Galar region with Grookey in #PokemonSwordShield. This little one knows sticks are all the rage, so of course it’s the perfect starter @Pokemon for Trainer Drumstick.#GrookeyGang report in⬇️ pic.twitter.com/NzIRS6yEdD

Crunchyroll shared some beautiful original artwork from @nashirasauce featuring the anime streaming services mascot, Hime, as well as a variety of Pokemon. They lock their starter choice in with the hashtag #ScorbunnySquad.

TODAY’S THE DAY 🔥 DO YOUR BEST, I’M RIGHT THERE WITH YOU! #ScorbunnySquad pic.twitter.com/E1B18hpEvi

This post will be updated as more companies begin celebrating the launch of Pokemon Sword & Shield.