Brawlhalla has been updated to Version 3.52 across all platforms, including Nintendo Switch. New store items are now available, as well as an all-new Capture the Flag game mode. A new map has also been introduced, known as "Demon Island". Check out the full patch notes for the update below.

New Skins for Mirage and Thatch and a new Guitar Solo Taunt can also be found in Mallhalla. Additionally, we’ve made game improvements and other updates!

New Brawl of the Week - Capture the Flag

Protect your team’s flag while stealing the enemy team’s flag in this 3v3 game mode for control of Demon Island! Unite both flags at your base to score a point. Watch out! You’ll drop the enemy’s flag if you take damage. Players can return their flags to their base by touching it. First team to 3 points wins!

- New Capture the Flag Game Mode
- 3v3 Team
- Unite your flag with the enemy’s flag at your base to score points!
- First team to 3 points wins!

- Changed some Legends’ and Crossovers’ animations during the Match Preview screen back to their idle pose. Barbara and Jake are back to dancing.

- Xbox One players can now purchase the BCX Pack 2019 from the in-game tiles.

- Orion – A revered warrior and champion, the mysterious armored knight uses Rocket Lance and Spear to battle his foes in the halls of Valhalla!
- Mordex – Wielding Gauntlets and Scythe, this lycanthrope steps into battle!
- Val – An android assassin with terrifying strength and quicker-than-light cognition, Val is a force to be reckoned with when utilizing her Sword and Gauntlets.
- Brynn – Competing for the pure joy of it, this Valkyrie has seen many victories due to her skill with the Axe and Spear.
- Thor – Finally entering the ring, Thor, God of Thunder, makes his appearance in the Grand Tournament with his trusty Hammer, Mjölnir, and his powerful Orb.
- Lucien – This mysterious highwayman is always scheming for gold, and now has come to Valhalla to take part in the tournament wielding Katars and Blasters!
- Lin Fei – A defender of the innocent and teacher of the lost ways. She is a great teacher who has developed her own fighting style, the ‘Way of the Iron Dragon,’ which utilizes her Cannon, Katars and an ancestral dragon-spirit.
- Yumiko – Holding the appearance of a blind seamstress, this centuries old fox spirit has been brought into battle wielding her Magical Hammer and Bow! 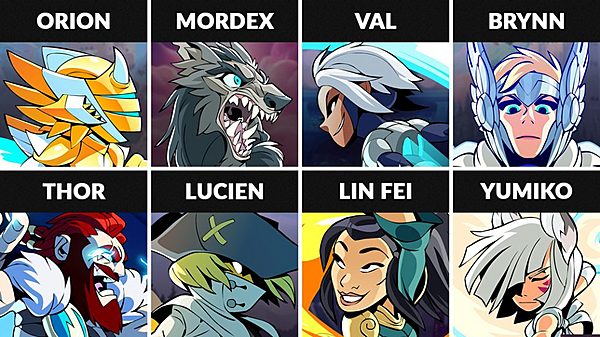