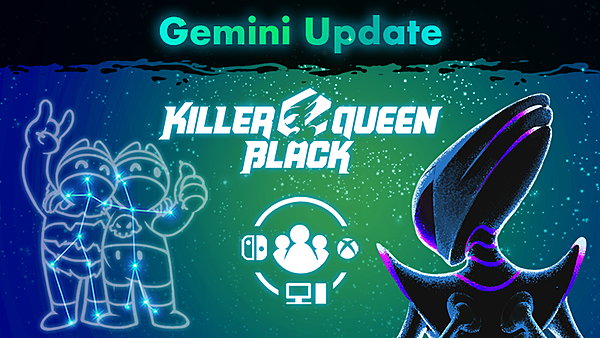 Killer Queen Black has gotten a significant update called the 'Gemini' patch. Check out full patch notes for this update below.

We're incredibly excited to share our biggest update ever. The Gemini Patch, featuring cross-platform party support! Now players on all platforms can add each other as friends and party up for Quick Play, Ranked, and Custom matches. Additionally, Switch users should notice a significant performance improvement in both gameplay as well as controller responsiveness.

Our partnership with Network Next (https://www.networknext.com/) is now live! Players all over the world are eligible for faster connections to our game servers located in US West (California), US East (Ohio), Canada (Toronto), South America (San Paulo), EU West (London), EU East (Frankfurt), AP South (Syndey), and AP North (Tokyo).

Speaking of regions, check out region select (for PC only - releasing on Switch very soon). Choose your region(s) of desired play!

- Random hive exits removed, now the only exit from the hive you entered unless it is full

It should also be noted that the game is going to be on sale next week for 40% off on the eShop. So wait until then if you haven't already picked up the game!