Donkey Kong 64 was originally going to be "more 2.5D" until it was rebooted

Well that would have been interesting...
23 November, 2019 by rawmeatcowboy | Comments: 8 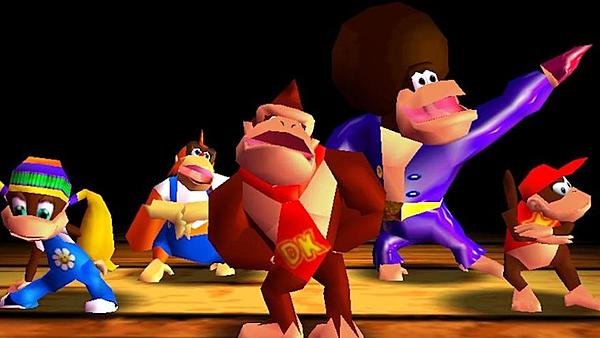 Donkey Kong 64 took the Donkey Kong Country series and expanded it in all dimensions, including from 2D to 3D. The 3D platformer is notorious for being absolutely huge in many ways, including a plethora of collectibles and places to explore. Turns out that wasn't always going to be the case, though. In an interview with Nintendo Life, former RARE dev Mark Stevenson talks about how Donkey Kong 64 was originally going to be a 2.5D affair.

"It was a monumental task, a massive game, a massive amount of work. Also it was in development for around 3 years, the team that created DKC3 moved onto it after shipping that game, but about 18 months into development it was rebooted, the team was changed up with the leads on design and software getting replaced and the game changed from being a more 2.5D platform to what it turned out to be more in line with the Mario and Banjo structure of open 3D level that got a lot of reuse. The original plans of trying to recreate the DKC format of tonnes of A-B levels just wasn’t going to be feasible from a production point of view."

I loved DK64 as a kid. It was the first game I ever 100% completed (102% in 64s case). That being said going back to it now as an adult the game hasnt aged very well. Its much too tedious and slowpaced, the camera is janky and their are a few glitches.

Im glad the game exists as to show what DK COULD be like in 3D and to show that if Nintendo ever decides to venture back into the 3D space with DK what NOT to do.

DK64 IMO still did a lot of things great presentation (at the time the game was gorgeous), K.Rools character development/cutscenes, the boss fights, the idea of playing with many different Kongs with different abilities (execution left a lot to be desired though), the music, and the multiplayer were all great IMO.

I haven't replayed it in a very long time. But I remember enjoying it, except being forced to play the retro games. I think it was a case of just adding too much, since I did like the core gameplay. I think the final boss is one of the best ones of the N64, and maybe Rare's last good adventure game? I remember COnker having a better story, but a more wishy washy gameplay, then Star Fox Adventures while looking nice was very pedestrian, I didn't play Kameo but from what I've seen it seems similar to Star Fox Adventures.

In all blunt honesty, DK64 always felt like a lesser version of Banjo-Kazooie. Which is ironic, because they used BK as a prototype for DK64 in some ways.

They could have made DKC4, in the same pre-rendered, 2D style, just a lot better because of N64's power. The game could have been massive, and great, so long as they actually let you play DK again. But instead, we got a poor-man's Mario 64 clone, with a bunch of new made up characters no one asked for.

It's certainly not a BAD game. Just a far cry from what it could/should have been.

One of my favorite games.

I love Donkey Kong and Rareware but never got around to playing this till a couple years ago. I found it repetitive and a chore to play at times, definitely tried to do to much and the game felt bloated.

I would have preferred it that way. DK64 is the only DK game I couldn't beat because is just not fun to play. It's tedious, long, and boring.

I'd stick with the 2D games, including Jungle Beat which is not as good as the country games but at least it is fun.

Me too, 2.5D may have saved it. It was surprisingly not fun at all. I easily enjoyed Jungle Beat more.

I always had a love/hate relationship with this game. I would've preferred if they made it a 2.5D platformer in the same vein as Crash Bandicoot.