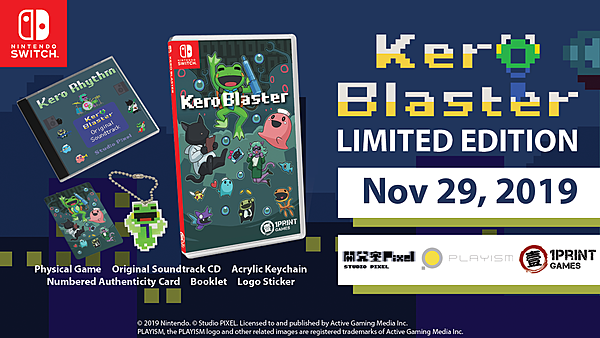 Kero Blaster is a challenging action game developed by Studio PIXEL, Japan’s renowned indie developer that brought the world Cave Story and Ikachan. In Kero Blaster, you play as a bi-pedal salaryman frog venturing through worlds littered with dangerous enemies and plenty of treasure. Destroy these enemies with a variety of upgrade-able blasters!

“First off, thank you for your support.” says Studio PIXEL founder Daisuke “Pixel” Amaya. “When I was offered the chance to do a Kero Blaster packaged version for the Nintendo Switch, I felt that all the energy I poured into creating its gameplay truly was worth it. If even just one more player can find enjoyment in Kero Blaster, I’ll be a happy man.”

“We at PLAYISM started off publishing the PC version of Kero Blaster, and now thanks to the folks at 1Print Games reaching out, we’re thrilled to be able to provide all the game’s fans out there with this limited edition packaged version,” says PLAYISM. “It’s chock full of extras, including a booklet, the original soundtrack, and more. Whether you’re a seasoned Kero Blaster player or a first-timer, and whether you love frogs or maybe aren’t the biggest amphibian fan, we hope you’ll help our favorite little salaryman out in getting his job done.”

“As a fan of Studio PIXEL’s games, it has been an awesome experience to bring Kero Blaster physically to Nintendo Switch. We started 1Print Games with the vision of celebrating indie games. Working with Studio PIXEL, which some consider to be the progenitor of indie games, was a very humbling experience. I’m so happy to have Kero Blaster as our very first release. I hope long-time fans and gamers will enjoy Studio Pixel’s latest work,” says 1Print Games co-founder and managing director Iggy.