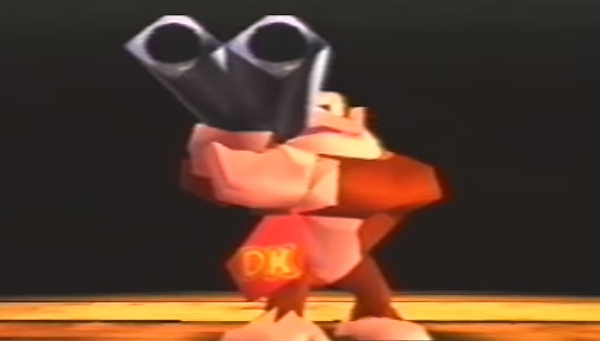 Throughout the course of a game's development, numerous elements get added, tweaked, yanked, and changed altogether. That's what happened during the creation of Donkey Kong 64, but there was one early element in particular that apparently horrified Shigeru Miyamoto.

In an interview with GamesRadar, Donkey Kong 64's creative director George Andreas said that Miyamoto went to RARE's offices to see an early build of Donkey Kong 64. As he was running through the build, Miyamoto spotted an in-game weapon that just didn't fit with the universe.

"Miyamoto-san, Iwata-san, and Howard Lincoln – chairman of Nintendo America at the time – came to our new studio. We switched on the game, they saw the rap, and then I started running around as DK. I swung on some vines, collected bananas, and they were beginning to really smile. And then I pressed the button to pull out the gun. It wasn't a textured gun that you might expect but a realistic shotgun with bullets flying out and with horrifying sound effects. You get so used to things being in development, even if it is a placeholder, and I completely forgot that it was in there. I'm shooting beavers, turned to my side, and see this look of horror on Miyamoto's face! Then he smiled and, taking some paper and a pencil, drew a coconut gun in front of us. It had leaves on it and he handed it to me. I looked at it and said 'Oh yeah, that's cool, we'll put that in' and the coconut gun was put in after that."

I think Miyamoto was in the right here. A coconut gun, while absolutely silly, makes a lot more sense than Donkey Kong toting a realistic shotgun. I'm not quite sure how the team thought that was a good idea!

Pretty sure Diddy Kong also had realistic guns instead of the Peanut Popguns. I can assume it was the same for the other Kongs.

This is Nintendo. What do you expect them to do to make them a friendly kind of guy? Let a gorilla kill beavers with a gun?

Why is this news? Didn't we know about this for years now? I guess it wasn't common knowledge.

Shigs was right to be horrified.

Yo, I don't care what anyone says, I liked that game.

One of the few times I will concede with Miyamoto. He was right about this one. The realistic shotgun just doesn't fit in within the world of Donkey Kong Country, even though I bet Rareware was thinking in terms of "country" a little too much, after the usage of mine carts from previous games.

Still, I am wondering what his mindset was when asking them to make the baddies in GoldenEye 007 show up at a hospital bed in the end credits being greeted by Bond like as if they were actors this whole time... Seems kind of lily-livered for a mature game. That one I will not concede yet.