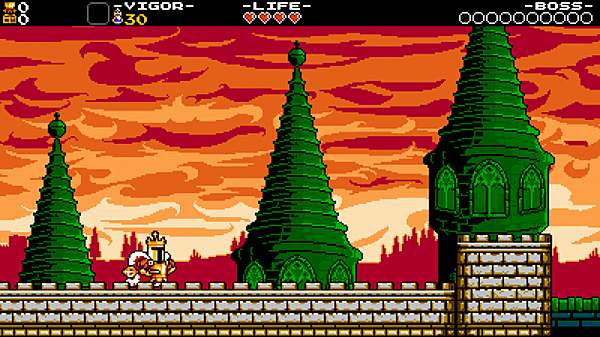 Did you know that King Knight is the only character in the Shovel Knight games that takes a full point of damage when he's hit? All the other starring characters lose half a heart when they bump into an enemy. Why the change for this expansion? Yacht Club explained in a new dev blog.

With King Knight’s adventure, we wanted to differentiate the level design from the meaty levels of Shovel, Plague, and Specter. We instead focused the game on shorter, quick-to-complete courses more akin to ones you might encounter in a Mario game.

One difficulty was that the core idea of Shovel Knight’s health system has always been built with a large stage in mind. Shovel Knight essentially has 20 hits, which works great when you’re adventuring through 30 screens of level, but Since King of Cards’ stages are much shorter, we decided it would be best to reduce the player’s overall health amount…by half! With only a few hit points for every stage, players must approach the game knowing full well that every notch of damage taken and every bit of health picked up really matters.

But they also made the fantastic change where attack enemies can net you hearts to heal yourself.