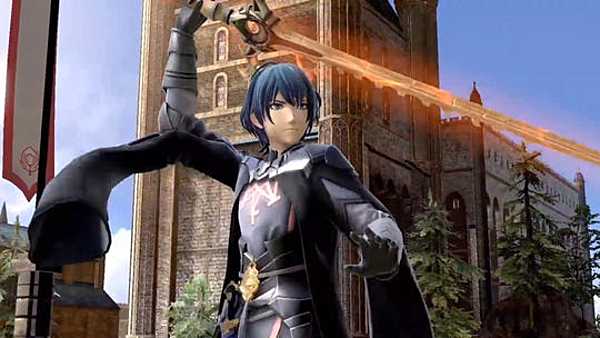 Sakurai's latest Famitsu column has come out, and it's a hot one. Sakurai addresses the discussion of Fire Emblem overload in Smash Bros. Ultimate, along with some other tidbits. Check out a summary of the discussion below, courtesy of BlackKite.

- The new fighters were not decided based on Sakurai's favorites
- the new characters were picked by Nintendo
- Sakurai believes there are too many Fire Emblem characters, as well as too many sword users
- Sakurai says this was the decision that was made, so he just continues on with work, as he has other things to consider
- since there are so many sword fighters, Sakurai gives each fighter exclusive tactics to use
- the 3 Hero Relics owned by the 3 house leaders in Fire Emblem: Three Houses are being included in move inputs

Wow, thanks Nintendo! Thanks for shoving Fire Emblem down my throat! Please be sure to add a Sword and Shield rep in the next pass too while you're at it! These 2 widely popular IPs definitely needs all the exposure it can get!

Byleth may be a Fire Emblem rep, but they are hardly just a sword user. I've had so much fun playing against my friends in Byleth vs. Byleth matches, the slow charge but massively powerful attacks make for some awesome moments. Definitely my favourite of the FE fighters, and the only one from the DLC I've been personally interested in.

Dude, Terry is absolute bliss and Banjo is really fun to use.

They are fun, but I don't have the personal connection to their games in those cases to make them really great for me personally.

the new characters were picked by Nintendo

OK but what about all the previous 6 Fire Emblem Sword Users? Did Ninty pick those as well?

Maybe they did. Who knows? Not us lol

Wow, thanks Nintendo! Thanks for shoving Fire Emblem down my throat! Please be sure to add a Sword and Shield rep in the next pass too while you're at it! These 2 widely popular IPs definitely needs all the exposure it can get!

Don't worry a Sword/Shield character IS coming and by that I mean it will be another Fire Emblem character that uses both a Sword and Shield and I will enjoy it, very...very much.

I'm not a fan of excessive Fire Emblem and sword users in Smash either, but adding a character to Smash has never been about getting IPs exposure. That's the side effect of inclusion in Smash. The intent of adding a character (whether or not it was actually achieved) has always been to create unique and fun characters (and occasionally to make third party partners happy).

I like how they made each costume for the Dragon Quest character a whole diffrent character instead of having 3 echo fighters that are copy/paste wxept one has a blue flame instead of orange.

I almost kinda wish in the next game they would make Dr. Mario, Pichu, and all Links just alr. Costumes

Impossible for Pichu. They have different body types and different hitboxes.

That would work for some characters, but not all of them... part of being a costume is having a near-identical build and abilities to the base character. So while it could work for say Dr. Mario for Mario, Lucas for Ness, Chrom for Marth, Dark Pit for Pit and others, some like Toon Link for regular Link couldn't possibly work.

I wonder if Sakuraitachi wil have more saying in the next round. Also there were many male characters in the first pack, sp I wonder if they might add more females this time...

Don't you guys have hearts? Fire Emblem was on life support once remember?

I'd prefer an abundance of love over the franchise getting killed for sure. Fire Emblem is a great series.

Honestly this is more a problem with Ultimate than it is with Fire Emblem. Bringing back all previous characters, makes a new one seem that much more overwhelming. I would have probably preferred if they just added Byleth alongside the roster of Marth, Ike and Robin. But of course that would anger some as they'd be missing their favorites.

But hey, I say, let the salt flow.

I think Nintendo must have been signing another deal with Sega for some future games and gave them a free choice and they chose Joker. I refuse to believe Terry Bogard was anything other than Sakurai himself being self-indulgent, though.

Really? Because based on Sakurai gushing over Persona I would have guessed Joker was added for self-indulgence as well.

It's just easier for me to justify a corporate mandate when it comes to Sega when compared to something like SNK.