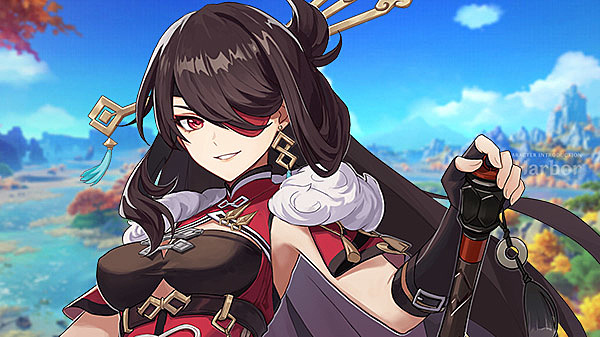 Another character profile for Genshin Impact has been released. Check out details on Beidou below.

There are those who say she can split mountains and part the sea. Others say she draws lightning through her sword. Some say that even the mightiest of sea beasts are no match for her.

For those not from Liyue, it may sound like a hearty joke, but those that have sailed with her will say—

“No matter what sea beasts there may be, Beidou will be sure to split them all in two.”

Almost all of those in Liyue know the mighty name of Beidou, Captain of the Crux, as she often becomes a topic of conversation amongst locals.

At the port, there are those who can give you the most colorful and detailed accounts of the moment Beidou struck down the mighty sea beast known as Haishan.

During their feasts, merchants heartily discuss the exorbitant fines Beidou has incurred bringing shipments in.

But for the crew of the Crux, the thing most worth discussion is the Mora Beidou has won from Ningguang.

While the exact figure is unknown, and the times they’ve bet unknown, but when the crew sees Beidou return to the ship tipsy, they know it was a rough night of drinking.

“Next time I’ll be sure to bankrupt her!” Beidou would say, as she lay on the deck of her ship.

Of course, the crew takes these brave words as a drunken joke.