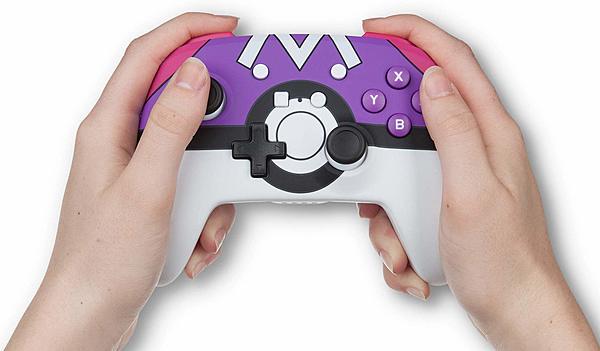 Play your favorite Nintendo Switch games like a pro with this officially Licensed POWER A enhanced wireless Controller from the Poke ball series. Designed for comfort during extended gaming sessions, this Bluetooth wireless Controller features a master ball design, motion controls, mappable advanced gaming Buttons, and standard ergonomic layout. Enjoy up to 30 hours of gameplay with new alkaline batteries (other variables affect play-time) or add your own rechargeable batteries. Can be used when Nintendo Switch is docked or undocked. Does not support HD rumble, IR, or amiibo NFC. Not for use with Joy-Con only games.

You can grab the POWER A Pokemon Master Ball-themed Enhanced Wireless Controller for $50. Pick up yours via Amazon.

That looks like a pretty bad d-pad placement :/ I mean you can't be sure until you hold it in your hands but yeah. With the number of mandatory d-pad games on that console, you'd think the best placement would be way closer to the stick. The official Switch Pro has it closer and still has worst placement than the U Pro had. The U Pro is still the best controller ever in my heart. It made it so neither of the finger positions felt secondary. Both, d-pad or stick on the left, stick or buttons on the right, felt great and natural. That's also thanks to the symmetrical sticks. I never understood why the dumb asymmetric sticks became the norm. Also the d-pad itself was better on the U Pro.

The things I would take from the Switch Pro are the matte finish of course and also the material and shape used for the buttons. Bigger buttons and triggers are better on the Switch Pro.

Mix those two and you've got a winner.

Totally with you on the Wii U Pro being the best controller ever. I hooked my Wii U up last week to play Bayonetta 2 and used it for the first time in ages and couldn’t believe how much better it feels than the Switch Pro after using that for the last few years. Immediately ordered an 8bitdo adapter to play it with the Switch and have no regrets. Still need to swap it out for games that benefit from gyro and no capture button is a shame but in most cases it’s a much better controller on Switch.

Funny, I did the same some weeks ago and found the Switch Pro to be the much better controller for me. But it's great to see that it's possible to use whatever you want, at least with some adapters.