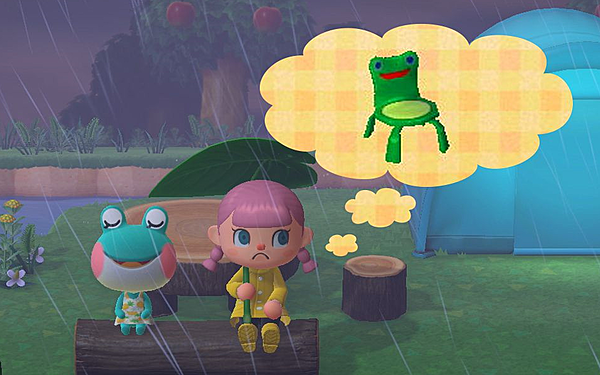 We've got some bad news for Animal Crossing fans and a particular piece of furniture. Dataminers are currently making their way through Animal Crossing: New Horizons, and apparently the Froggy Chair is nowhere to be found. That doesn't mean it can't be added later through updates and DLC, but as of right now, it seems you'll have to deal with seating of the non-amphibian nature.

Dataminers have also dug up the special NPCs that have been found in the game's data. Here's the list of everyone you can expect to encounter.

Finally, we have some development details come from the game's source code as well. Things discovered by dataminers include...

- the game's codename was Park
- the game runs on Nintendo's Lunchpack 2 engine
- the game uses Havok physics
- the engine is the same as Splatoon 2, Mario Maker 2, and ARMS

What's the deal with this chair?

Does it croak when you sit on it?

No, what you see is all there is to it. I think it has become a meme recently though? I don't know.

The Animal Crossing discourse perplexes me. I suppose is something you get when play the games.

I SWEAR this chair existed in the other games. And if Im very much mistaken, it made a fart noise when you sat on it.. ?

Oh for God's sake ENOUGH WITH THAT DUMB MEME!

No Reese and Cyrus? I really liked their shop.

Wish they got rid of Sahara, though. You basically pay somebody to ruin your house.