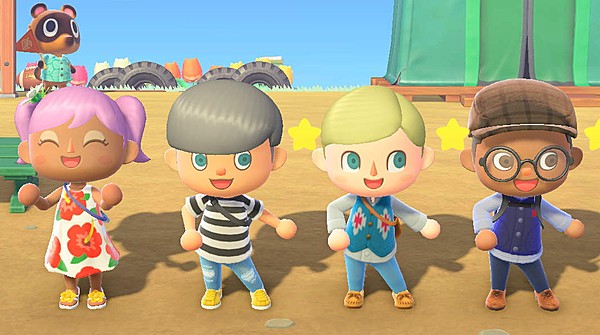 Many have noticed that Animal Crossing: New Horizons handles customization quite a bit differently. You don't have clothing and hairstyles that are locked to certain genders anymore, so you're free to dress as you'd like, and create your own style. In an interview with the Washington Post, producer Hisashi Nogami opened up about this approach.

According to Nogami, the customization options aren't just about gender. The new options are tied to the team’s overall feeling that “society is shifting to valuing a lot of people’s different identities.”

I'm someone who is currently struggling with gender identity, so not having to pick male or female at the start of the game was just the nicest thing. Seeing animal villagers mention romantic partners of the same sex is also awesome! This game was handled extremely well in this regards.

All about that. Good on Nintendo!

I'm someone who is currently struggling with gender identity, so not having to pick male or female at the start of the game was just the nicest thing. Seeing animal villagers mention romantic partners of the same sex is also awesome! This game was handled extremely well in this regards.

It does make you pick male or female though...unless you can unpick one of them. I didn't really try. Anyways I prefer having the option to officially pick female. As a closeted Trans women I love it when games refer to me as female.

In english at least, it only asks you to pick a "style". And then literally the same customization options are available to you regardless of which style you pick.

So far, I haven't seen any Animal Crossing characters refer to me with pronouns of any kind. Just my name.

Yeah I know nothing's locked but that "Style" is still clearly something. What it is I don't know.

Personally I'm fine having to pick genders and having pronouns because I tend to express what I can't IRL through games and thus being referred to as a she or by her is a part of that, but if the pronouns are gone than that's fine I guess, like I don't care for them potentially being gone but I'm not gonna argue that the game is wrong for removing them...though I still am curious what the "styles" do.

Some of the animals now have love interests, and it doesn’t matter what sexual orientation?! This stuff used to be forbidden in E-rated video games back when E for Everyone was known as K-A for Kids to Adults! Seems like the ban has been lifted, and that’s a good thing; we’ve come a long way since those days.

I guess Nintendo knows the demographic of each franchise, too.

This is the only time I've seen someone use the word "stan" in a wholesome context. I approve.

I like this open minded approach. Fun Fact : in the Japanese versions of the games, both Saharah and Gracie are male, not female like in the western releases. I like to think that canonically they're both openly transgender.

As a transwoman, I should just say I love this.

I do wonder if that just applying to an American localization:

"While not inherently odd, several other localizations of the title has words pointing out which selection is male and female, from Spanish to German, Italian, Mandarin Chinese, simplified Chinese, Japanese, Korean and others (some languages also used female/male variants of the word islander or villager)"

I do wonder if the progressive changes would also mean more games focusing on people of said genders. Since while it's nice having many options, focusing on each group a game at a time, would make it more commonplace.

Several cartoons on Netflix do have characters of different backgrounds on the main cast. (Like in Kipo, She Ra, Voltron (not great but it's there).

I think RPGs have the best opportunity to add party members of different genders. Maybe making something like Trials of Mana, were you choose the characters you want to learn more about but can't choose everyone.

Or like Octopath traveler have different adventures told from around a single fantasy world.

Several cartoons on Netflix do have characters of different backgrounds on the main cast. (Like in Kipo, She Ra, Voltron (not great but it's there).

I hate to nerd out, but all three shows you mentioned are produced by the television department of DreamWorks Animation, one of the two major animation studios currently owned by Universal Pictures (the other one is Illumination Entertainment who is a business partner of Nintendo right now). Most of DreamWorks’ shows require a Netflix subscription to watch, but there’s a chance those shows will move to the upcoming streaming service Peacock when that launches.

But yeah, we might see better representation of the LGBT+ community in the upcoming, definitive series finale of Will & Grace (produced by another affiliate of Universal) than we will in these animated TV shows that aren’t even on TV.

Ehm TV is subsiding and turning into streaming services. I suppose those services will eventually turn into basically TV.

One thing I'll give you is that despite including diversity the shows, haven't delve deep into the LGBT characters, what they feel, developing those relationships in a romantic way, and also having that relationship challenged (like all romantic plotlines are).

I'm trans, but I have always just chosen female because that is how I see myself. However it would be nice if we could be other species, as I do not identify as human either. (Not that they would have a dragon option even if you could be a different species.)

I really like how they've handled identity in this entry, and it's great to see them becoming more inclusive. It really is about more options and freedom, and it's refreshing to see it done right and not handled sloppy or a forced attempt.