Some gorgeous locations to explore
01 April, 2020 by rawmeatcowboy | Comments: 0

Just the other day, Fischl was profiled for Genshin Impact. Today the character gets her very own trailer, which you canc heck out above. Along with that, a massive round of details and screens for the city of Mondstadt and Liyue harbor have been shared. Check out that wrap-up below.

You have arrived in Teyvat—a fantasy world where the seven elements flow and converge. In the distant past, the Archons granted mortals unique elemental abilities. With the help of such powers, people formed a bountiful homeland out of the wilderness. However, 500 years ago, the collapse of an ancient civilization turned the universe upside down… Though the calamity the world suffered has ceased, peace has yet to be restored. 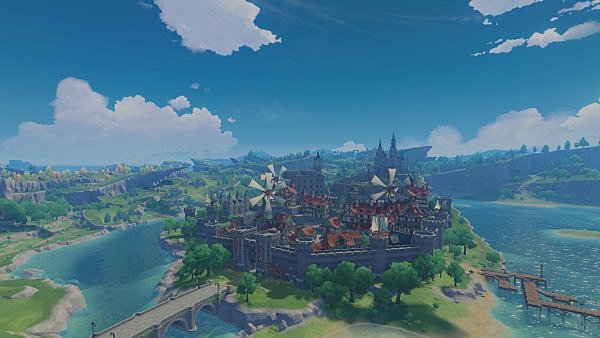 A city of freedom that lies in the northeast of Teyvat. From amongst mountains and wide-open plains, carefree breezes carry the scent of dandelions—a gift from the Anemo God, Barbatos—across Cider Lake to Mondstadt, which sits on an island in the middle of the lake. 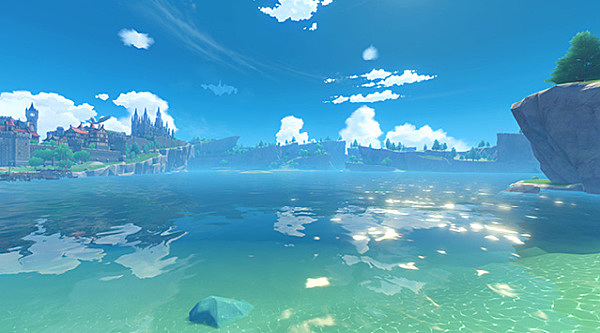 A natural freshwater lake. The lake’s wide, crystalline appearance has remained unchanged for eons—so clear you can see the bottom, and cool and refreshing to drink. It is none other than these headwaters that brought Mondstadt’s ciders and wines to fame and made the lake the symbol of Mondstadt that it is today. 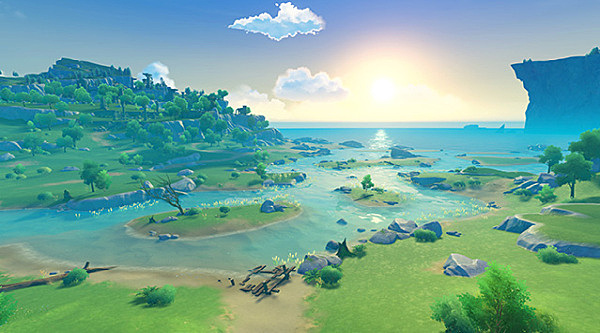 Stretching eastward from Windrise to the sea, Falcon coast—together with Cape Oath—shelters the sea from three sides, creating a bay that sits east of Mondstadt. Given the long coastline and shallow waters, citizens of Mondstadt often come here to enjoy a nice stroll. On occasion, you can see falcons soaring high above the blue waves that brush upon the white sand. 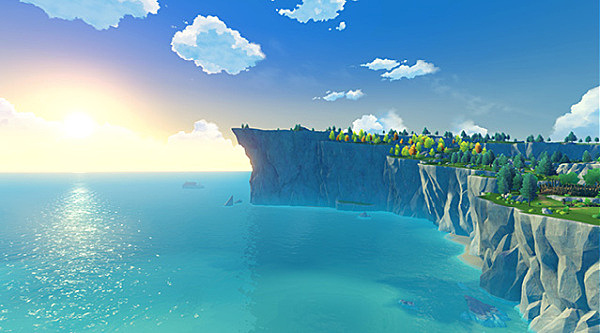 In the southeast corner of Mondstadt’s surrounds lies a cape that borders with Galesong Hill. Legend has it two lovers made an oath to each other here and left behind a deeply touching story. To this day the area is still known to be popular amongst young lovebirds. Other than being a great vantage point for watching sunrises and sunsets, the drop in terrain makes it easy to see Windrise, which sits facing the sea. 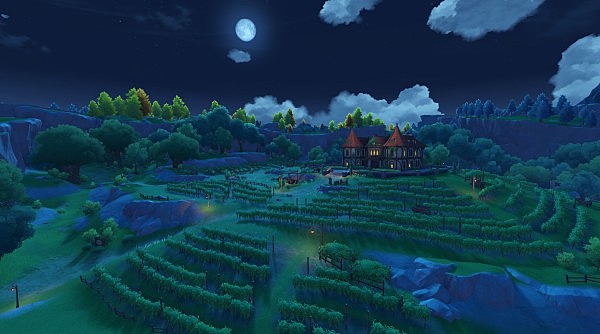 Nestled in the land southwest of Mondstadt sits the winery that has passed down the legacy of Mondstadt’s traditional wines and ciders for generations. The grapes grown here are used to produce a range of wines that are popular right across Teyvat. Every year’s products are split, with a portion being sold locally within Mondstadt, the rest is sold off via the trade route that sits south of the city. 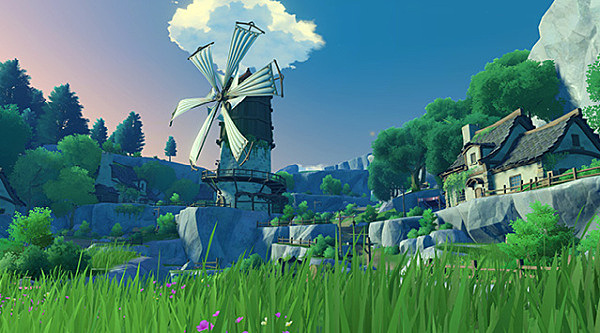 A sleepy little village to the south of Mondstadt, that sits facing the lake that surrounds the city. Most of the village’s residents are hunters that provide fresh meat for all the big restaurants of Mondstadt. Springvale’s rustic appeal attracts many tourists. If you are lucky in your travels, you may come across a restaurant that truly knows how to bring out the best qualities of Springvale. 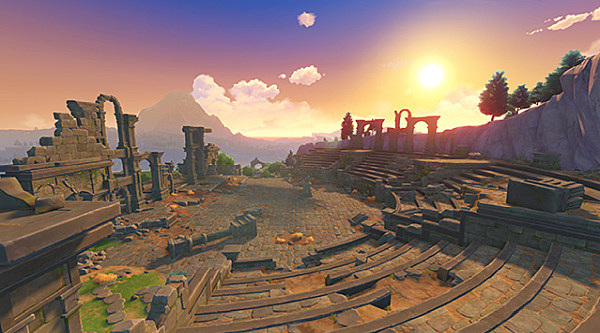 A collection of temple ruins that sits northeast of Mondstadt. According to local legend, millennia ago this area was a temple for worshipping the Anemo God. Though it has been left to waste for centuries, leaving the ruins you see today. If you look closely at some of the stone pillars, you can still faintly make out some elegant carvings. This long-forgotten symbol of commemoration is engraved with the maxim: “Wind brings the seeds of tales, time allows them to take root.” 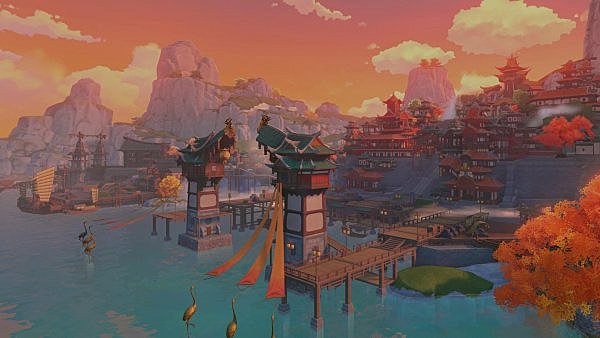 A bountiful harbor that lies in the east of Teyvat. Mountains stand tall and proud alongside the stone forest, that together with the open plains and lively rivers make up Liyue’s bountiful landscape, which shows its unique beauty through each of the four seasons. Just how many gifts from the Geo God lie in wait amongst the rocks of Liyue’s mountains? 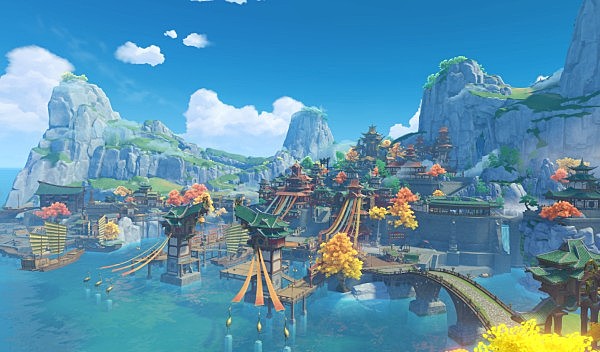 The establishment of the harbor kicked off Liyue’s seafaring trade. As Teyvat’s largest market harbor, the sheer amount of goods that flow to and from it is simply incomparable for other ports. Every year during the Lantern Rite you can see thousands of lanterns ascend into the night sky—a Liyue event that you can’t afford to miss. 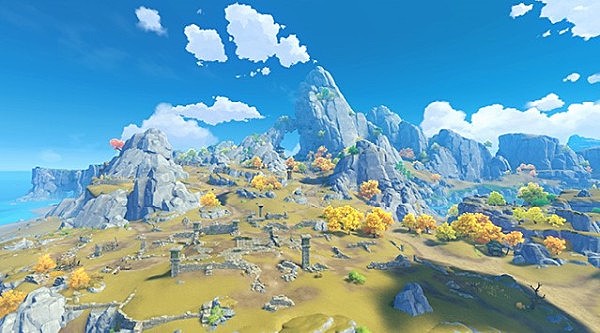 The pride of the mountain range that shelters Liyue Harbor from the west, acting as a natural shield against any enemies that may come that way. There are uncountable records of wars both big and small whereby enemies have been blocked by this barrier. As such you can still see ancient ruins of city walls, forts, and defensive structures. Liyue’s earliest mining operations are also believed to have started in this area. 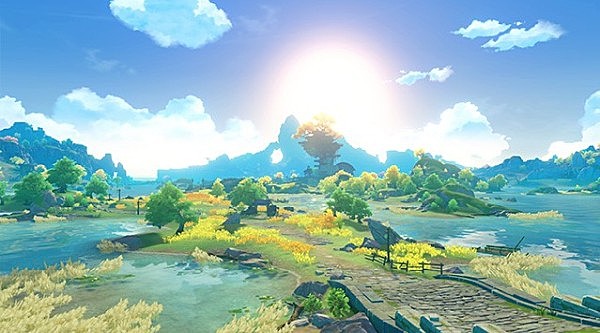 Dihua Marsh, a wetland area north of Liyue, gets its name from the silvergrass (“dihua” in the local language) that grows in the shallows of the marsh. The scrambling web of rivers has grown into a flourishing and wide-spread ecosystem full of flora and fauna—an awe-inspiring sight for travelers to the area. The area also acts as the road from Mondstadt to Liyue, and as such many merchant caravans choose to stop here to rest. Wangshu Inn stands within the area, a symbolic structure from all directions. 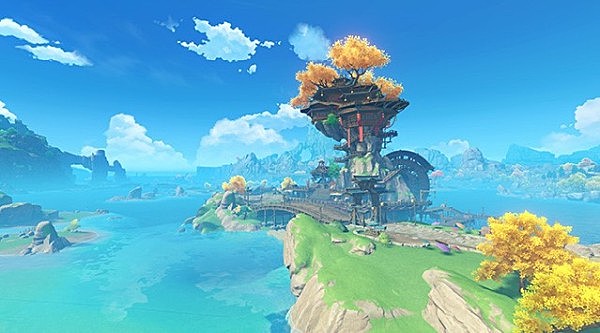 A landmark within Dihua Marsh, built upon a massive stone pillar. As most of the patrons that stop here are traveling merchants, the inn provides an area for them to trade and set up stalls. The view from the top of the inn is jaw-dropping—weather permitting you can see all the way to Mt. Qingce and Jueyunjian in the distance. Legend amongst the stalls says that the tower of the inn hides a mysterious secret, but that’s as far as the legend goes, as no-one has ever been able to validify the claims. 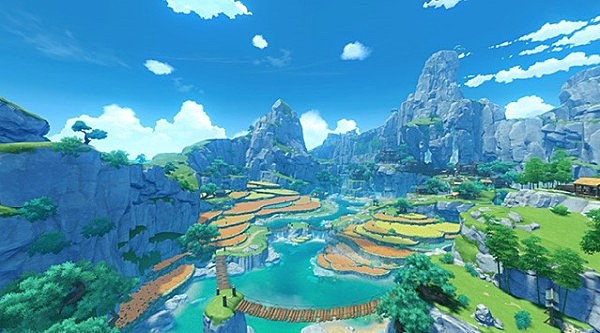 At the northernmost point of Liyue, hidden between the hills and the bamboo forests sits Qingce Village. White rolling clouds that sit in the valleys between the mountains are embellished with row upon row of crescent-moon water paddies. When the wind blows, the ripples in the water give off an array of colors. 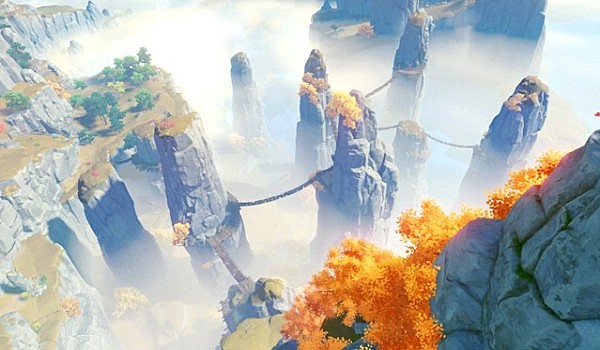 Dizzying peaks that sit shrouded in mist and clouds in the northwest of Liyue. The area hides many stunning views, but owing to tracks found on the complex paths leading up the peaks, a legend has formed that the hidden home of the Adepti lies somewhere in the area. Though another factor may simply be the hopes of those that seek blessings from the Adepti. Given the dangers within, the area is not suitable for outsiders. Best viewed from afar at Wangshu Inn.