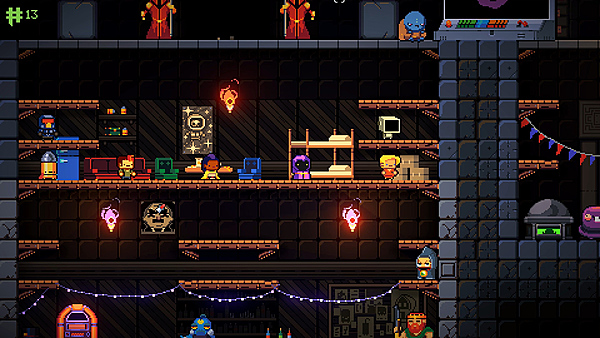 Enter the Gungeon was a massive hit on Switch, and now the follow-up Exit the Gungeon is available as well. In an interview with Nintendo, Dodge Roll's David Crooks explains how the spin-off came to be.

Enter the Gungeon was born from silly ideas and goofy puns (we actually had the title before even having a game concept), and during that game’s development our team had always pondered the idea of how our heroes would leave the Gungeon once they found what they were looking for. We loved the idea that after all of what you went through in the game that the way out would be as simple as an elevator. After meeting Singlecore Games (our co-development partner on Exit the Gungeon) we merged some of the ideas in another game they had and found a way to continue this saga, complete the journey of the Gungeoneer’s escape, and still have a variation on the original’s gameplay that felt fresh enough to stand alone.

GoNintendo Thought: Final Fantasy Crystal Chronicles: Remastered Edition is a chance for the game to really shine
May 29, 21:54 by ridleysaria May 29, 21:14 by thedreaminghawk
SpongeBob SquarePants: Battle for Bikini Bottom - Rehydrated - "Welcome to Rock Bottom" trailer
May 29, 21:47 by hammergalladebro
Strawberry Vinegar - more gameplay
May 29, 21:43 by manazuishou
Pokemon Co. teams up with Midea for a line of Pokemon-themed kitchen items
May 29, 21:36 by manazuishou
SELFY COLLECTION: Yume no Stylist heading to Switch in Japan on June 12th, 2020
May 29, 21:30 by manazuishou