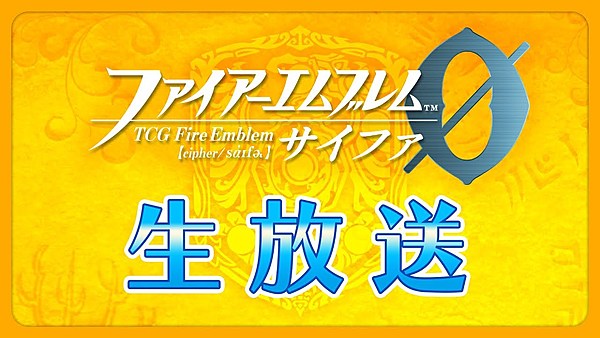 News came in overnight about the future of the Fire Emblem Cipher card game. Unfortunately, the game will be wrapping up once its next booster pack releases in Oct. 2020. Since that initial announcement, producer Ryota Kawade hosted a live-stream to further explain why the game is coming to an end. Check out a recap of that info below.

- it’s been five years since Cipher launched, and the circumstances around the trading card game have changed over the years
- one of Cipher‘s objectives was to be a card game enjoyed by those playing or waiting for the next Fire Emblem game
- Fire Emblem Cipher would fulfill this objective by putting the spotlight on characters from the previous games
- this role is now fulfilled by Fire Emblem Heroes, along with events for the fans such as concerts
- Cipher also aimed to gather and connect Fire Emblem fans
- Kawade mentioned how two Fire Emblem fans met thanks to a Cipher event and ended up marrying
- Fire Emblem itself changed in these last five years, and the franchise has become much more popular

Along with the explanation of the game coming to an end, some details on the final round of content was shared. Check out that info below.

- the title for the 22nd and final Booster Pack is “Eiyuu tachi no Gaika”
- cards will feature characters from every single Fire Emblem game and include many surprises
- illustrations for the cards will be handled by an all-star selection of Cipher artists
- the artist lineup includes Awakening‘s Yusuke Kozaki, Three Houses‘ Chinatsu Kurahana, and more
- there will be 13 cards forming a fresco with all the Fire Emblem protagonists

Virtuous says they have "no doubt" they can handle ports of any current-gen game for Switch, talk about XCOM 2 Collection challenges
May 25, 18:31 by thedreaminghawk May 25, 18:17 by jayvir May 25, 18:12 by thedreaminghawk May 25, 17:46 by enthropy
Nintendo shares a handy infographic for Clubhouse Games: 51 Worldwide Classics' various titles
May 25, 17:40 by hammergalladebro
RUMOR - Xenoblade Chronicles: Definitive Edition resolution details, plus more handheld footage and framerate
May 25, 17:39 by enthropy