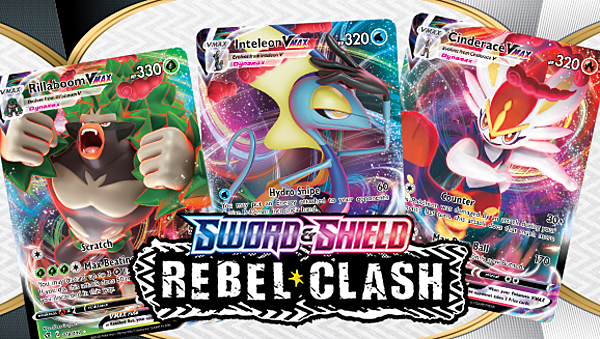 Depicted in the midst of chest-pounding fury, Rillaboom VMAX is not a Pokémon to be trifled with. This furious Pokémon VMAX is primed and ready to unleash incredible damage with its Max Beating attack. Not only does this vicious attack hit for 130 damage, but you can also choose to discard up to 3 Grass Energy from Rillaboom VMAX when you use it, adding 50 damage for each card you discard. That's up to 280 damage from a single Max Beating! Talk about lowering the 'boom.

Your opponent had better be wary if they go up against your Cinderace VMAX. Thanks to its Counter attack, this fiery final Evolution of Scorbunny can dish back whatever it takes. If Cinderace VMAX takes damage from an attack during the previous turn, Counter returns that damage—plus 30 more. To really turn up the heat on the other player, use the Max Pyro Ball attack, which does a respectable 170 damage and makes the target Burned. Cinderace VMAX could prove to be a hot addition to your Fire-type deck.

The sly-looking Dragapult VMAX is the odd one out in this roundup (since it's not a first partner's Evolution), but it's one tough customer. Its Max Phantom attack is a nod to Dragapult's tendency to launch Dreepy from its horns like missiles—this attack hits your opponent's Active Pokémon for 130 damage and also lets you put 5 damage counters on their Benched Pokémon however you like. Will you pile all that damage on one unfortunate Pokémon, or will you spread out the punishment? No matter what you choose, your opponent will be sorry they messed with Dragapult VMAX.

Check back later as we reveal more of the fantastic cards you'll find in Pokémon TCG: Sword & Shield—Rebel Clash, and be ready when the expansion releases May 1, 2020.