LEGO and Nintendo had 8 ideas before they settled on LEGO Super Mario, abandoned ideas and Nintendo's involvement discussed 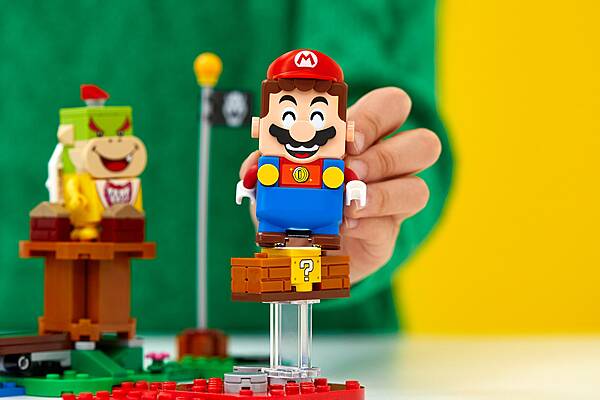 It took a very long time for Nintendo and LEGO to officially partner up on a project, but we're going to see the results of their efforts on Aug. 1st, 2020 with LEGO Super Mario. In an interview with GamesIndustry, Lego design manager Jonathan Bennink discussed how long ago the process got started, and just how many ideas they had.

"The first talks started in the summer of 2015, when upper management met and had talks about whether we should collaborate. At that level it's mostly about values, what you want to bring to the world, and see if you align in terms of morals. Then about eight ideas were brought to the table -- all concrete directions -- and one of them was this idea of an interactive figure. We had a range of them at the time, not just Mario.

Both Nintendo and Lego management voted on the ideas and the one that got the most votes was the interactive figure, because it was one of the most original things that we saw in the line-up. It was something neither company had done before.

The only brief my design team got was: do something that only these two companies could do together. It's a Lego product, but it's also a Nintendo product. It was never going to be a normal thing. Both companies have so many fans who have been asking for this for a while, and we felt like maybe they can wait a little bit longer but we will give them something new."

Mr. Bennink also discussed one of the ideas that the team toyed with, but eventually moved away from.

"We tried a concept where kids would have to complete levels in the app, and then they'd build it in that way... but it kind-of took all of the fun and the light-heartedness out of the building because kids were only completing levels in the app. We figured they did that enough in video games already. We felt that the fun here is being creative and building. That was something we had to learn the hard way, because we put a lot of effort into the other app where we made these levels. We scrapped everything and started again. But that's what happens. You learn."

As any Nintendo fan knows, Nintendo takes their content very seriously. When it comes to partnering up with other companies, they want to be as involved as possible. This stems from back in the early days of Nintendo, where the Big N felt extremely burned by the results of the Super Mario Bros. movie. Nintendo took a lot of time to get back to a place where they could trust other companies, but now they make sure to work side-by-side with them. Bennink explains just how involved Nintendo was with the LEGO team.

"Hands-on is putting it very nicely. They are just so passionate about anything they do. They care about what the consumer in the end feels more than anything else. They've been a part of making the play concept from the earliest sketches. Sometimes they would make a prototype, sometimes we would, and we'd ship them back and forth. They really did the essential thinking on what the play could be.

They also helped us with the technology. We developed the sensor technology together, and now they are helping us go to market. It's been a rather unique collaboration for Lego, where we have been so close on everything that we do, including the packaging and the drop tests. In prototype they would drop it 6,000 times."

As much as I respect Nintendo for always wanting to try create new and unique experiences, this is one of those partnerships where I would love for them to just do a regular LEGO set. No gimmicks, no apps, no game integration. Just LEGO with their IP.

It would be a wonderful marriage of the two toys that I was most fond of growing up and am still extremely fond of today.

I agree. I'm not one to normally buy something like Legos but a traditional Nintendo set, Mario or otherwise, would have been tempting. Instead I see what they went with and it's completely unappealing. That's Nintendo though, they're different to a fault.

Instead I’m gonna spend the money I’ve saved on petrol for the last three months and buy me some star wars LEGO.

I'm with you on that. What they're making with these new Mario sets is "new" in terms of Lego, but I think that as a kid I would have gotten bored of it quickly. They would have been like a video game I couldn't lose, and I would have preferred the challenge of the game itself.

But a Lego set with the detail and variety of their old castle sets, mixed with an IP like Zelda, would have provided me with countless hours of fun and creativity.

A traditional Lego Mario set would have been a fun novelty, but only that. They're trying to make something that kids want to play with, being ambitious with the design is necessary.