GoNintendo Thought: Why is Clubhouse Games: 51 Worldwide Classics so limited in its 4-player online options?

Hopefully today's feature doesn't come across as too grumpy. I feel it's always important to share honest opinions with you guys. My goal is to do that without being snarky or rude. Constructive criticism, as they say.
Let's hope my approach panned out in this feature. As always, thanks for reading. 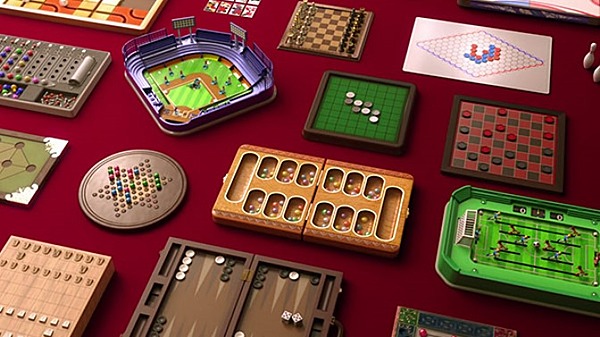 Let me be clear about something. I absolutely adore Clubhouse Games: 51 Worldwide Classics. I've had a ton of fun with it already, and it's most likely going to stay in my game rotation until the Switch rides off into the sunset. There are so many great games in the collection, and as long as I have someone to play against, it'll be quite hard for me to put it down. It's a perfect way to kick back, relax, and have a bit of easy-going fun with friends or strangers online. With that out of the way, there's one major gripe that has been eating at me more and more since the game launched.

Clubhouse Games: 51 Worldwide Classics gives you 51 different games to play, and over 40 of them can be played online. That's a pretty sizable chunk of the experience. If you have another player with you, you two can go nuts with every option there is in that 40+ group. If you jump into a group with three other friends, your selection of games to play online becomes incredibly small.

Believe it or not, there are just 8 games in the entire collection that can be played with 4 players. That selection includes Ludo, Last Card, Mahjong, President, Sevens, Blackjack, Texas Hold Em, and Dominoes. Now don't get me wrong. In that batch of 8 games, we have mostly winners. Playing those games with 4 players can be a ton of fun. The problem is that 8 games out of the entire collection is quite limiting, and there are so many other titles included in Clubhouse Games: 51 Worldwide Classics that could work with 4 players.

Trust me, I get that it's a bit silly complaining about this. I'm a long-time Nintendo fan, as are you guys and gals. We all know that Nintendo makes baffling decisions from time to time. It's part of what makes Nintendo Nintendo. They often nail almost every aspect of a game, creating unbelievably fun and exciting experiences. Then there's that one little tidbit that leaves you scratching your head. A decision that seems like a no-brainer, yet Nintendo decides to head in the opposite direction. We're left wondering how on earth Nintendo could have missed this mechanic or feature, as it seems plain as day to everyone else. 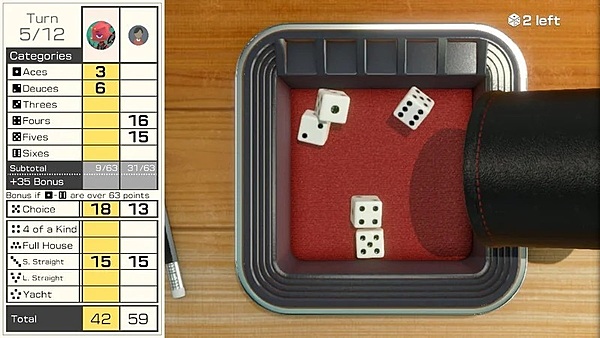 The 4-player online options of Clubhouse Games: 51 Worldwide Classics is Nintendo's latest confusing decision, but it stings just a tad more than usual. The whole point of Clubhouse Games: 51 Worldwide Classics is playing with others. Sure, you can play all these games in solo mode against the computer, but everyone knows that going up against real life opponents with titles like these makes them that much more fun. When the focus is on multiplayer action, why would Nintendo make a design choice that greatly limits that functionality?

I completely understand that not every game in Clubhouse Games: 51 Worldwide Classics would work in 4-player mode. You're not going to have 4-player chess or toy baseball. It just doesn't work, so leaving those options out of the 4-player groupings makes perfect sense. When you whittle down the selection to games where 4-players would be a viable option, the decision to leave out the offerings becomes even more frustrating.

Yacht Dice, Matching, Golf, Darts, Toy Tennis, Shooting Gallery, and 6-Ball Puzzle are just a few examples of games that could totally work as 4-player games. These are all games where the decision to limit them to 2-player is completely confounding. While I would be willing to listen to a counter-point about introducing too much lag for some of these games, it still wouldn't explain the limitation for other games. Yacht Dice can function completely fine with or without lag. The same goes for Matching as well. There's nothing about those games that relies on split-second timing or pinpoint accuracy. Why in the world were they left out?

Of course, the biggest point of contention for fans is Bowling. We've had bowling games before from Nintendo. Hell, Nintendo practically dominated the bowling game market with Wii Sports Bowling. There are millions upon millions of people who played Bowling on the Wii, and they have such fond memories of jumping in there with 3 other players. Now we see Bowling make its grand return in Clubhouse Games: 51 Worldwide Classics, and for some unknown reason, online play is limited to 2 players. I have wracked my brain for way too long to come up with a solution, and I have absolutely nothing to offer up. The omission of 4-player bowling is an absolute bummer. 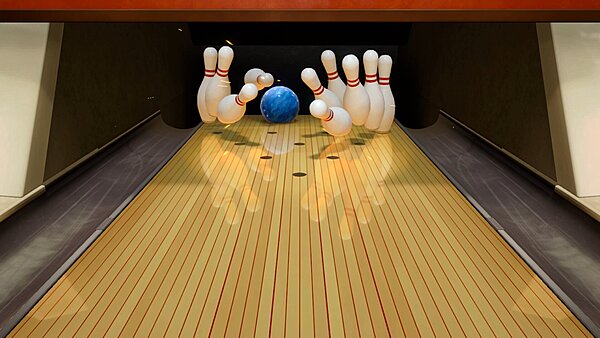 The 4-player situation only gets worse when you expand your way of thinking. While some games don't work in 4-player, there's certainly an easy solution to make them 4-player experiences. Even if 4 players can't play at the same time, why not let 2 other players view the action? Why can't we have a game of Four-in-a-Row where two players square off, and the other two watch the action? Then when a winner is declared, the other two go head-to-head to find a winner, and then the two winners face off in the ultimate showdown? Again, it seems like such a simple feature to include, and it keeps more players entertained at the same time.

I understand that strangers may not want to jump into an online game where they have to sit and watch before they can play. That said, why not go the route where you lock that option to friends only? I know I have countless friends who would love to get into some tournament gaming with Clubhouse Games: 51 Worldwide Classics. We have no problem sitting back and watching our friends play. We're eager to see who comes out on top for bragging rights, and we're also talking to each other through some external method (House Party, Facetime Audio, ect.) at the same time. We're keeping ourselves doubly entertained while the action is going on.

Once you run with the 4-player tournament idea, so much of Clubhouse Games: 51 Worldwide Classics' collection opens up for play. You'd get just about everything that's available for online play with 2 players. You might have to weed out a couple due to the length of play, but still, you could easily get 30+ games in there. I honestly think that's a low estimate as well, and comes from a point of being extremely picky about rules. Even if you did go with that low-ball estimate, I think there would be plenty of players extremely excited to have that many 4-player options instead of the 8 that we have.

Again, I know it's silly to say this, but I'm not sure how Nintendo bungled this one so badly. These games live or die by the amount of people you can play with. Going up against the computer does the job when you're running solo, but must of us are looking to get in on multiplayer action. Be it with friends we know or strangers, that kind of multiplayer content really extends the longevity of the game by a huge deal. The potential is right there within Clubhouse Games: 51 Worldwide Classics. It seems like such a missed opportunity to be so extremely limiting. 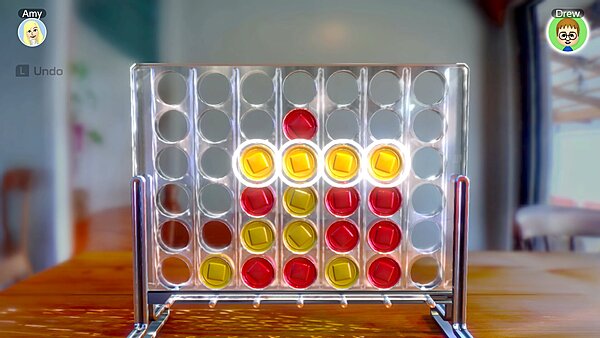 I plan on spending many more days ahead with Clubhouse Games: 51 Worldwide Classics. I'll have online fun with friends, be it two, three, or four players. Sadly though, when I'm playing online, I'll be constantly reminded of how much better the 4-player content could have been. This can obviously be fixed with an update by Nintendo, but I doubt it will be. We've see the Big N jump in and make some tweaks to games after fan complaints, but it's very few and far between. I don't think that's going to happen with Clubhouse Games: 51 Worldwide Classics, but I'd absolutely love to be wrong.

It’s this kind of oversight that makes it too hard for me to consider buying this, especially for £35. That’s way too expensive for what looks like such a basic package. For that price you’d expect each game to have gotten a lot of attention, including supporting 4 player online for any game that makes sense for it. From the looks of things they just said “good enough” and called it a day.

I honestly thought this was going to be an exclusive extra for Switch Online subscribers à la Tetris 99 when this got announced. I still haven’t seen much to convince me that it’s worth being sold on its own for nearly £40.

Its limited and lacking features because its an ND Cube developed game. Mediocrity is their specialty.

This. Clubhouse Games: 51 Worldwide Classics is their first remotely decent game since 2011. I'm amazed Nintendo even gives them stuff to make.

What do you expect from the Mario Party devs.

Switch may have more polish but the DS version is just better and has way more love in it in addition to features like themes, challenges and unlockables.

Not to mention that more games could be played online on DS. Shame servers are gone.

I've been playing the demo a lot but hearing that's only two player bowling just hurts.

I pre-purchased it when it was first put up in the eShop and I don't even know why. I had rented the original on DS and enjoyed it, but not enough to buy it afterwards. Maybe it's because of the Switch's lack of 1st party games in 2020, I was just happy to see something new.

I'm already bored of it. While I like how fast paced Last Card (aka Uno) is, you have no way to customize the rules like you can in Ubisoft's version of Uno in the eShop. So when I'm in the mood to play Uno, it won't be this game's version. At most I can see myself booting it up to play bowling once in a while but that's probably it. I definitely regret buying it on the eShop because if I had bought it physically I would probably be trading it in towards something else not long from now.

edit: Another issue I had is that when a friend and I played online, we couldn't get matched up with random people to play online with, we could only play against CPUs and that is just lame. I assume it's like that across all games but we only tried Last Card, Chinese Checkers and Texas Hold 'em.

Yea, skipped this, felt it would make sence for a game on the consoles release, not 3 years after, it would be a decent releasegame to have access to all those games, but now we got some exclusives thats prob a better place to spend the money(even if theres been nothing first half of the year just like last year).