Don't believe the leaks! eShop wishlist exploit allows you to view Wii U and 3DS games on Switch 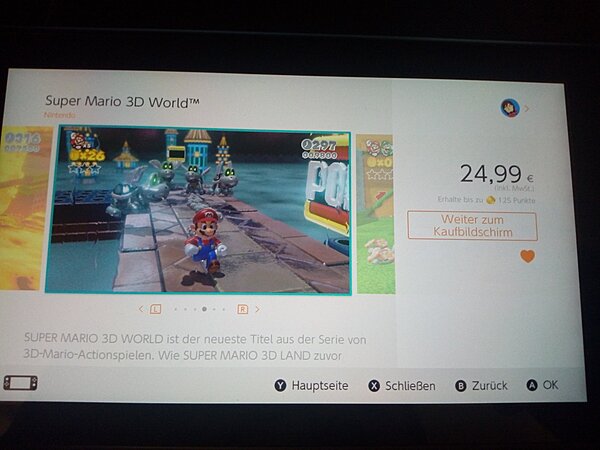 An interesting exploit has been discovered by Twitter user @JarylGaren (photo and info courtesy of him) which allows you to view 3DS and Wii U games on the Switch eShop. Simply adding a game to your wishlist via Nintendo's official website will allow you to view any game listing directly on the Switch's digital store, regardless of the platform. While some titles fail to load any images, certain ones like Super Mario 3D World, Pikmin 3, and Paper Mario Color Splash have a fully functional eShop page.

This has lead to some folks sharing photos as an act to create rumors. While the photos themselves are actually real, there is no actual evidence or official announcement that any of these games will be coming to Switch. At least not yet!

Switch ports of Pikmin 3 and Super Mario 3D World have been discussed for quite some time now, with some potentially legitimate rumors being shared by VGC and VentureBeat. Hopefully Nintendo has something official to share soon!

You have to port past games to Switch before they will even run.

Gamecube, Wii and Wii U used a PowerPC based CPU architecture and made bringing past games pretty easy, because they were all actually backwards compatible (even if Wii U didn’t expose that for GC it was still compatible) whereas the Switch uses an ARM based CPU so games need to be recompiled and other work done to make them run and run well.

Neat trick but not surprising. The eShop app on Switch is essentially a lightweight browser and will reformat a games page to fit the Switch like how a site will show a mobile formatted version when accessed by a phone.

I will say this...if New Super Mario Bros U deluxe can get a shot and it proved to sell well for Nintendo, then it would be stupid for Nintendo to atleast not attempt to port Super Mario 3D World to Switch.

And before you go with they have to remove gamepad features, so? Deluxe removed the touchscreen levels from the Wii U and it sold better regardless.

I haven't played 3D World and that's exactly why I think Nintendo ought to port it to Switch.

Deluxe removed the touchscreen levels from the Wii U...


Interesting. Were they replaced with anything else?

As far as I can tell, no. But they did bundle the DLC together.

Can't figure out why every weird or unexpected thing has to be called a hack or exploit these days.