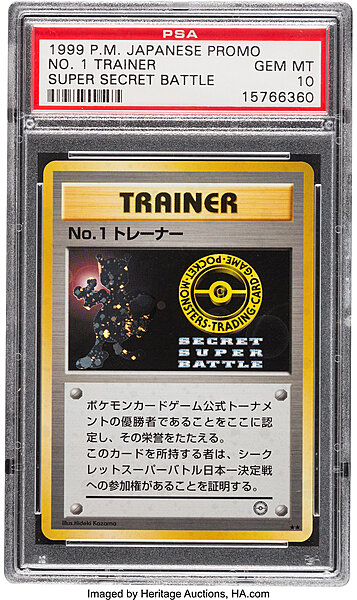 An exceedingly rare Pokémon Super Secret Battle “No. 1 Trainer” Trainer Promo Hologram Trading Card, one of seven known to exist, sold for a record-breaking $90,000 on Thursday, July 9, at a public auction of comic and comic art held by Heritage Auctions. Collectors consider the Trainer Promo card possibly the most sought-after card, and arguably one of the rarest cards in the entire Pokémon Trading Card Game.

Equated to one of Willy Wonka’s Golden Tickets, the holographic “Trainer Card” allowed the owner preferential entrance to a secret game tournament, hence the card’s name Super Secret Battle. The finals took place Aug. 22, 1999 in Tokyo. The 1999 card is graded a “Gem Mint 10” – meaning the rarity is in the finest condition of any such card offered at auction.

Owners only found out the location of the private game after winning one of these cards in one of seven regional tournaments. “This particular card was given to one of the seven first-place winners, meaning there are only seven of these cards in the world,” said Barry Sandoval, Vice President of Comics at Heritage Auctions.

The artwork is by Hideki Kazama, a Japanese artist whose work has appeared on three trainer cards over the years. The card, with text in Japanese, is translated as such:

The Pokémon Card Game Official Tournament's champion is recognized here, and this honor is praised. By presenting this card, you may gain preferential entry into the Secret Super Battle.

The Pokémon Super Secret Battle “No. 1 Trainer” card was one of several lots of high-end, rare playing cards and sealed card packs offered at Heritage Auctions on Thursday. An additional highlight included a Pokémon First Edition Neo Genesis Set Sealed Booster Box (Wizards of the Coast, 2000), which sold for $15,600.

The auction of rare comic books and original comic art continues through Sunday on HA.com