During Nintendo's Treehouse Live event today, WayForward revealed that they're working on Bakugan: Champions of Vestroia for the Switch. The title is an exclusive, and will see release in Nov. 2020. 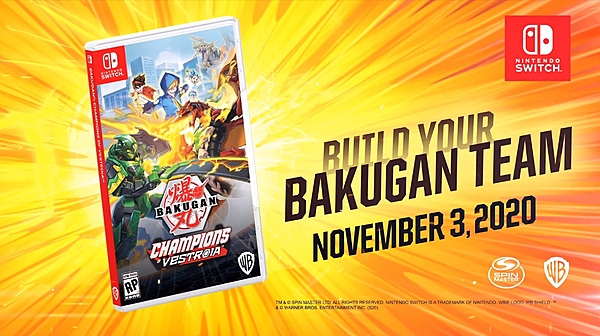 The game will include a single-player story mode, but also allows for online play where you can battle against other Bakugan trainers.

What a disappointment, and a waste of developer talent. The game looks really bad.

Wayforward could have done so much more than a crappy licensed game. Shame.

I mean, if people bought their games in droves then they wouldn’t need to do licensed games to stay afloat. Entitled gamers can blame themselves.

Wait..... so gamers should dutifully buy everything Wayforward makes?

No. We can say "This looks bad, I don't want this." all we want. No purchase necessary.

No, not at all what I meant. They’ve made licensed games forever— clearly it’s part of what allows them to make the original IP that people here like. The entitlement because this game isn’t what people wanted is gross. Perfectly fair not to buy it.

No there's absolutely wrong with people expressing their disappointment in this, especially since the reveal was specifically teased by Nintendo. There's always going to be a certain amount of overreaction but there's no getting around that this was a botched announcement. I don't blame Wayforward for working on licensed games but they really shouldn't have trusted Nintendo to reveal this.

You say they could have done more as if most of their games aren't crappy, licensed games, which they most definitely are. They have a single original series which is mediocre at best and a ton of absolute garbage.

I personally think they are significantly overhyped and their quality efforts can be counted on one hand. The only things they've done I'd praise as good effort are Contra 4, River City Girls, A Boy and his Blob, and if im being generous, Batman The Brave and the Bold. Ducktales Remastered was also great, but its hard to give too much credit when the framework for the game was done 30 years prior and great to begin with.

The chat in the reveal was not liking this one bit.

And I agree with them. My mind was racing when they said they were going to announce something. I didn't expect it to be a bland Pokemon-style game lacking all the good traits Way Forward is known for.

Funny you mention that it's Pokemon-style, because I remember the show being one of the many to try and piggyback off of Pokemon's success. I especially love the long, awkward pause after the trailer, as if the guy in the top-left was thinking, "...Really? This was our big new game today?" It was clear to me that he hadn't been filled in on what game he was announcing.

Literally the dumbest shit they could have announced, especially after months of silence. I love WF but man this just screams "please crunch hard for us" from the publisher.

Even better than Crash Bandicoot mobile! Best news this gen!

I remember it selling very well on the DS. Not sure if it was good, but kids loved it ten years ago.

Glad I didn't get myself hyped up for Wayforward's announcement. What a dud.

Oh man, what an complete and utter disappointment. I can't believe Nintendo even felt this was worth teasing.