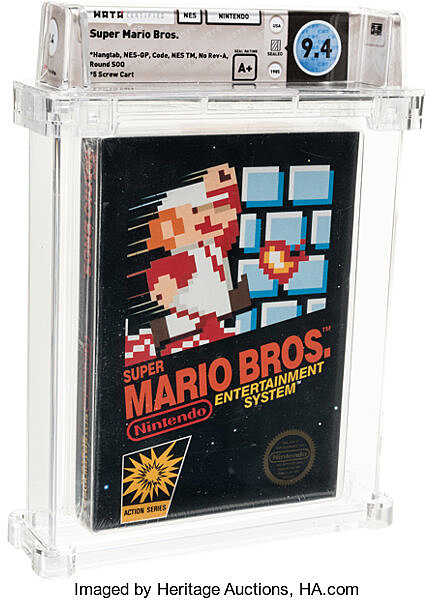 A new world record has been set for a video game auction, and the honor goes to Super Mario Bros.. You can check out the full details on this completed auction below.

A 1985 video game cartridge of Super Mario Bros. has sold for $114,000, Friday, July 10, setting the world record as the most expensive video game ever sold at public auction.

Sealed for 35 years, the game was sold during a public auction of vintage comics and original comic art held by Heritage Auctions in Dallas, Texas. It took 29 bids to push the final sale price into pop culture history.

The buyer wishes to remain anonymous at this time. The previous record for the most valuable video game cartridge ever sold at auction was a 1987 sealed copy of Mega Man, which was sold for $75,000, also by Heritage Auctions in November 2019.

Makes you wonder what we should be buying and putting in a vault RIGHT NOW.

Yeah my brother is currently buying rare Lego sets and keeping them sealed with the hope they’ll be a nice investment to leave his kids in 30 years.... don’t know if he’s making a good or bad decision lol