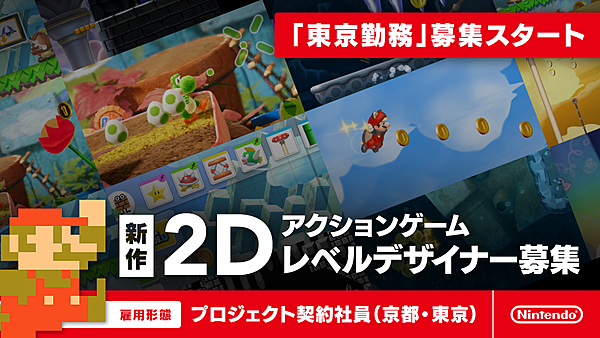 It's not a surprise to see that Nintendo is looking to create more 2D games, but it's always nice to have an official conformation. That's exactly what Nintendo shared on Twitter today.

Nintendo took to their Japanese Twitter account to recruit some new devs. They're looking specifically for level designers that can work on 2D action games. The image shared shows some of Nintendo's more recent 2D efforts, including Yoshi's Crafted World and Super Mario Maker 2.

With the job listings out in the wild, it's likely some of these projects are already well underway. Who knows, maybe we'll get to hear about one of them soon!

That picture doesn't instill hope and confidence that this is for a new DKC game..but alas I hope one of these projects is at least for a new Wario Land.

Well, this is EPD Tokyo taking on positions. The last 2D game they made was a little game on the GameCube titled "Donkey Kong Jungle Beat."

While I love the Wii version of Jungle Beat and think the game is SEVERELY underrated. I would hate if Koizumi went back into that direction of just having DK and none of the other DKC characters and elements.