Does Paper Mario: The Origami King contain a reference to the Super Mario Bros. Super Show? 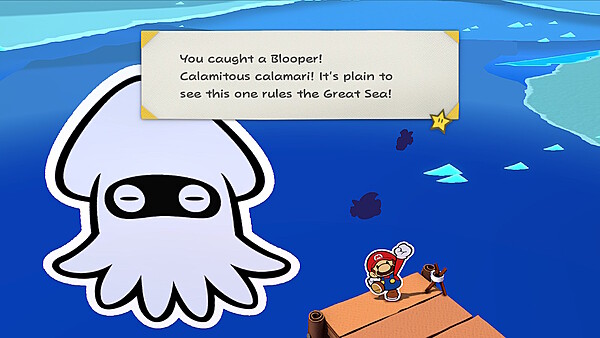 Nintendo loves to reference their older works in new games. We've seen countless throwbacks to previous titles through music cues, location names, and more. While tributes to old games is nothing new, we don't often see nods to other Nintendo-related endeavors. That's what makes the screenshot above so interesting.

At first glance, the Blooper line just seems like a fun bit of alliteration. For all we know, that might be all there is to it. Something about that line set off alarm bells in GN reader Banzai Bill's head though. He thought he had heard that somewhere before, and it turns out he was right.

The video above, which comes from the Super Mario Bros. Super Show, includes Mario and the gang getting stuck in a bit of quicksand. At the 4:28 mark, you hear Luigi exclaim, "Calamitous calamari," just like in Paper Mario: The Origami King. Is it a random example of two different writers coming up with the same thing, or was Nintendo's Treehouse slyly paying tribute to Mario's animated past?

I always wanted Nintendo to make a 3D Mario based on the Super Mario Bros. Super Show. The cast made it special and it would've been a treat to see them reprise their roles. Unfortunately, most of them have passed away. I love Charles Martinet but Captain Lou and Danny Wells will always be the voice of the Mario Bros.

Origami king is pretty littered with references from The entirety of the Mario universe so it's not without reason this could be a nod to the show itself.

I'm not saying it's impossible, but go Google "calamari calamity" and you'll see that multiple people have thought up that alliteration before this game came out. It's not that hard of an alliteration to think up. That's all I'm saying.

It would be easy to come up with when trying to make puns, but.. I want to believe.